Audi's big, aggressive Q8 is interesting and clever, with a side order of *whoa* 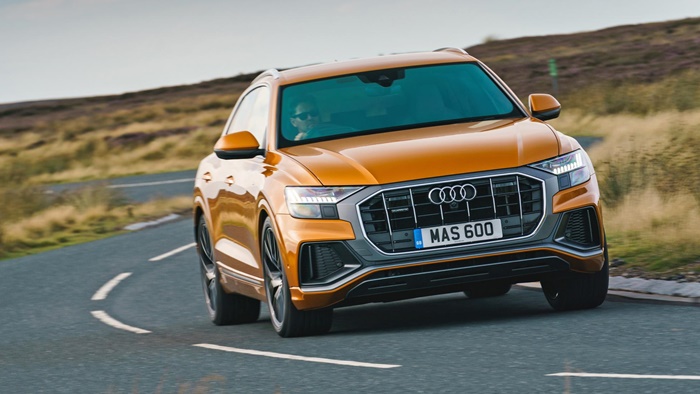 Overview - What is it?
Cram as many superlatives into an official description as you can, and you’ll have an idea as to how Audi regards its Q-brand range-topper.

It’s not a simple vehicle intellectually or practically, but Audi hasn’t skimped, which means there’s a lot going on here that needs unpacking.

(Click HERE to read our review of the Audi RS Q8) 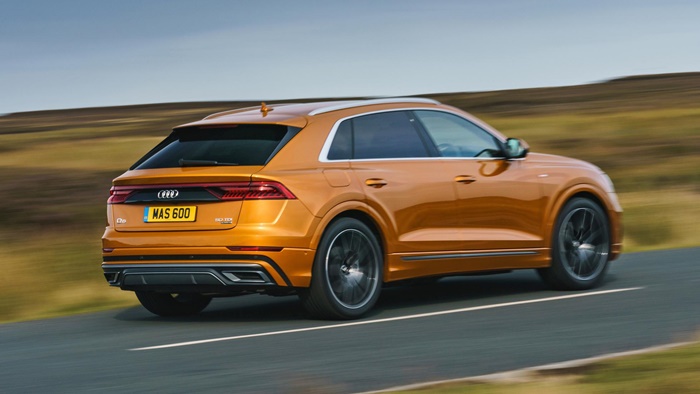 Most obviously, it apes the A8 sedan's slick, chunky and mega-mouthed design language, while being stuffed full of various strains of tech and looking expensive.

It’s also a four-door, five-seater ‘with coupe styling’ – which just means the rear slopes more than a Q7 – though the frameless doors are actually really very neat, and unique in the segment.

Boring it is not. Whether it’s to our taste is currently running at 50:50 based on an entirely unscientific straw poll of a few days of exposure. 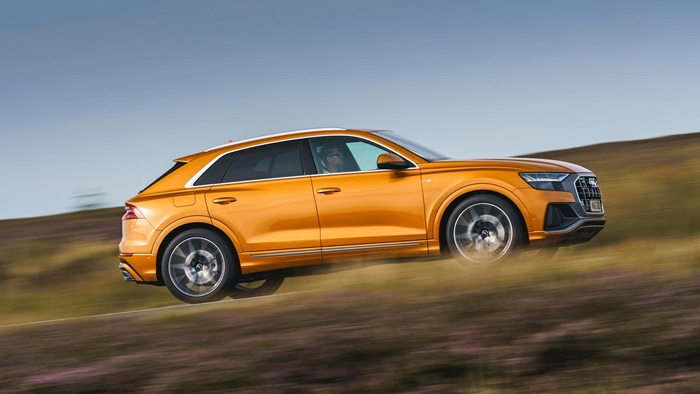 As you might expect, all Q8s will feature quattro AWD (with a standard locking centre diff) plus air suspension as standard, all get a slick 8spd auto, and in the UK we get two trims: S-Line and Vorsprung, both with considerable kit to play with.

It’s not cheap, but neither is it particularly stiffly priced for the segment; the Vorsprung is pretty much bingo on the ticking of the options boxes, so it works out at decent value if you want all the toys in one go.

Both the BMW X6 30d and the Mercedes GLE Coupe 350d slot into pretty much the same area depending on spec.

The tech pervades all on this particular model, mind, as you might expect from an Audi with an ‘8’ in the badge.

There’s dynamic all-wheel steer (optional on S-Line, standard on Vorsprung), a clever materials mix, and quite a bit of progressive thinking.

All cars get 48-volt mild hybrid tech, which is basically a little lithium-ion battery in the boot that feeds a water-cooled steroidal starter motor up front, a system that allows for engine coasting off-throttle, extended and improved (as well as smoother) stop/start function and reduced turbo lag.

And it recoups, too, so you end up with pretty decent fuel economy and CO2 figures (5.7l/100km combined, 178g/km) considering the size of the thing. 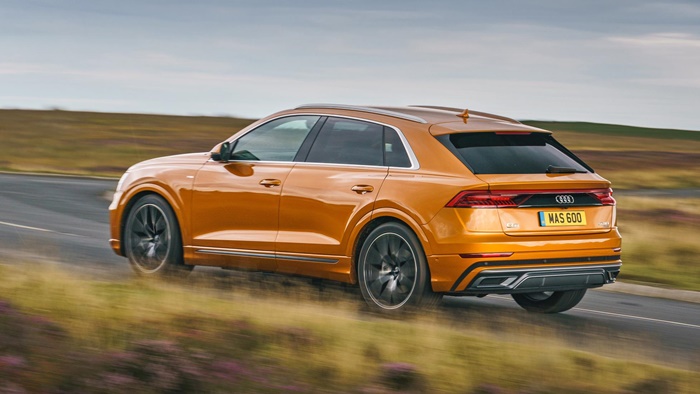 There are 39 driver assistance systems available depending on spec. You will not be short of buttons to push.

Driving - What is it like on the road?
We’ve only tried the 50 TDI thus far (there’ll be an RS at some point in the future, as well as the other models), and it’s a rapid, comfy cruiser with a surprising ability to go around corners.

Even on the 22-inch wheels. It’s not an exciting car to drive, but it disguises its size brilliantly, and has a decent stretch of dynamic change from the seven different – selectable – modes.

‘Comfort’ really is leggier and softer, ‘Dynamic’ noticeably firmer and more responsive with a 40mm drop. This sounds obvious, but it isn’t always the case.

There’s also an off-road mode, which raises the suspension 50mm from the Comfort/Standard position in case you need to potter down a track. 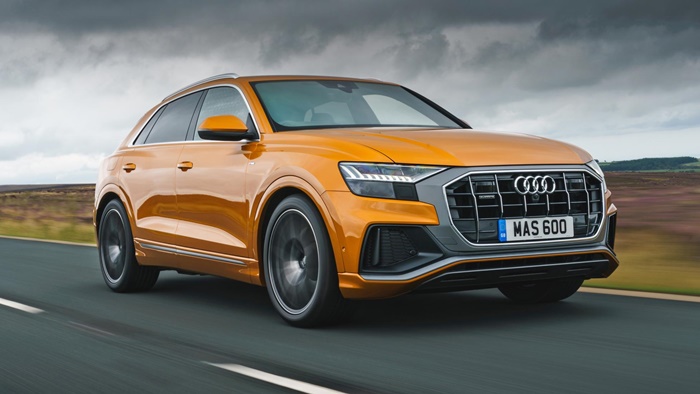 As ever, the all-wheel drive is clever and subtle, with torque-vectoring on the rear axle, and a torque split that can shove up to 70 per cent to the front or 85 per cent to the rear, depending on conditions.

The steering isn’t the last word in communication, but this is a big car that you don’t wince trying to thread down a back lane – it goes where you put it with the minimum of fuss, feels lighter than it is and can three-point turn with the best of them. For which we thank the four-wheel-steering option.

It’s wide – over two metres with the mirrors – and has some fairly hefty blind spots, but there’s a suite of systems (that you get used to quickly) to deal with the issues.

Overall, it’s a ‘doing’ car rather than something you’d choose to take out for the hell of it, but the general feeling is that Audi has got the air-ride nicely sorted in this one: you really can cruise efficiently and well, and it demands very little in the way of concern, even though it’s a big old thing. 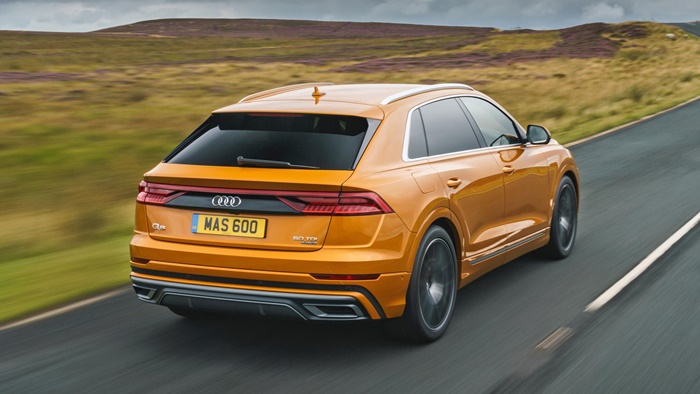 The engine is effective (0-100km/h in 6.3secs is very respectable), although it sounds ‘light’ in operation and isn’t characterful in any way.

We suspect the lower-powered TDI might feel a little bit underpowered and that a lot more bhp might unlock a bit more of the chassis’ talent and cause those big tyres to work a little harder. It all hangs together very nicely in this 50 TDI, mind you.

On the inside - Layout, finish and space
You were probably expecting this, but the Q8’s interior is lovely. OK, so the quilted grey leather in our test car is a bit like driving around in a posh pensioner’s house shoe, but the triple-wide-screened, high-def, slick-graphic’d dash stuff is worth showing off about. 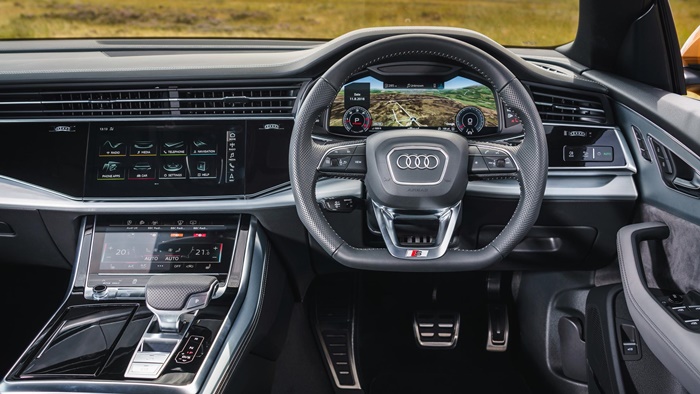 It’s clever and useful and there’s been a lot of thought put into it, even down to the clicky haptic feedback on the touchscreens.

It’s a little intimidating at first, but you soon get used to divvying up the functions and relegating the stuff that you don’t use as much. 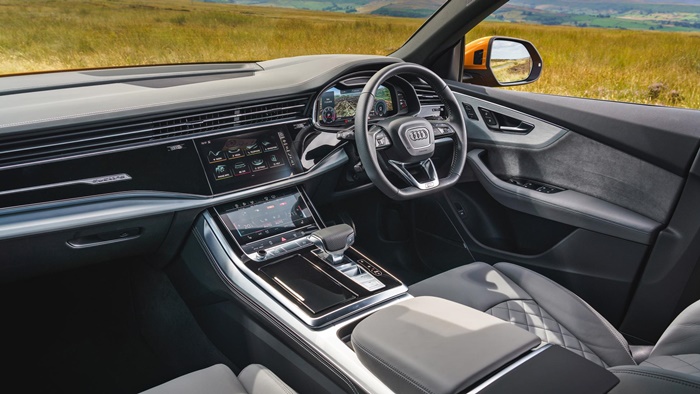 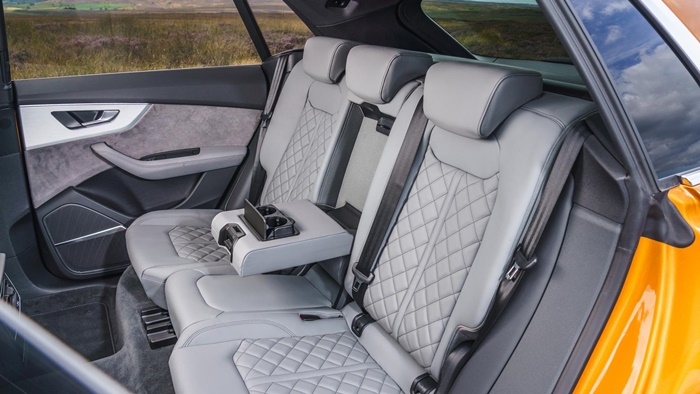 The seats are excellent front and rear, there’s acres of space in the back and a decent boot, ultimate volume slimmed slightly by the beetle back (i.e. not hugely brilliant for dog owners).

The rear seats split, too, so there’s every possibility that you can actually make use of the space to do practical things.

Yes, a blocky Q7 is bigger (and has seven seats), but you don’t buy a Q8 for that – it’s just more practical and useful than you might think on first appraisal. 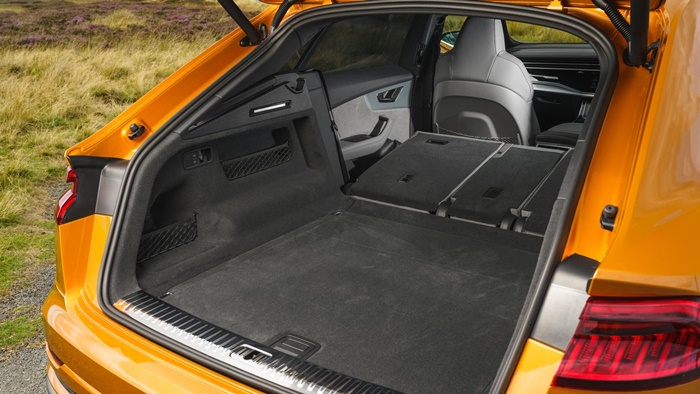 Owning - Running costs and reliability
This is a big SUV, so it won’t be cheap-cheap to run, but residuals are looking good, it’s relatively efficient and feels built properly.

It’ll cruise around happily, provide 885km-ish to a tank of diesel, and soothe away boring commutes with a duvet of technology. 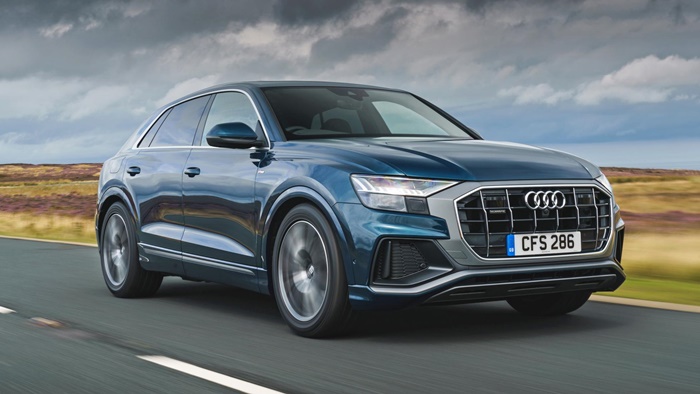 Just be aware that, as with any Audi, you can drop a serious amount of cash on options, some of which are probably rarely used. As an indicator, the Vorsprung top-level spec has pretty much everything as standard.

Verdict - Final thoughts and pick of the rangeI
t’s a complex car, the Q8. What feels initially like yet another thinly- sliced niche actually resolves into a very capable SUV that’s a good deal more practical than the looks would suggest. It’s polarising in terms of styling, but it certainly isn’t dull, and you can change the entire aesthetic with a choice of exterior colour.

The interior is fantastic, the technology enough to make you feel like an early adopter, and it’s all executed in a way that makes you feel like this is definitely a class-leader in terms of gadgets.

It’s not a driver’s car, but neither is it embarrassed by anything. An interesting, clever car from Audi. 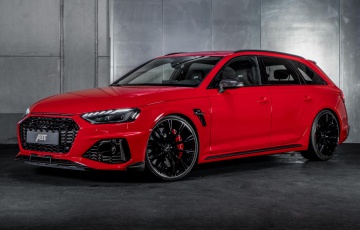 ABT has turned the Audi RS4 into a 533hp estate

It is called the ABT RS4-S, for those who think 450hp is just too measly