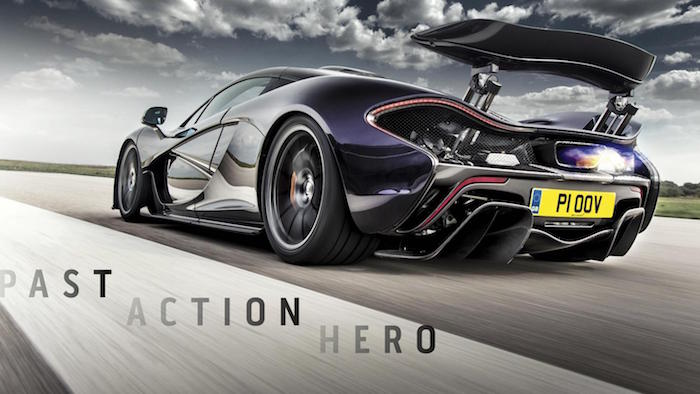 You might think a fifth anniversary an odd one to get the bunting out for. On the other hand, when the man from McLaren asked if Top Gear fancied a morning in the P1, in Scotland, the pretext could have been thinner than the world’s slenderest wafer.

We’d have still been there faster than the P1 gets to 100km/h (2.8secs – sub-three is still the mark of madness). Particularly when this is the 33.3 per cent of the Teenies’ hypercar Holy Trinity – along with the Porsche 918 Spyder and LaFerrari – that has thus far eluded your correspondent. 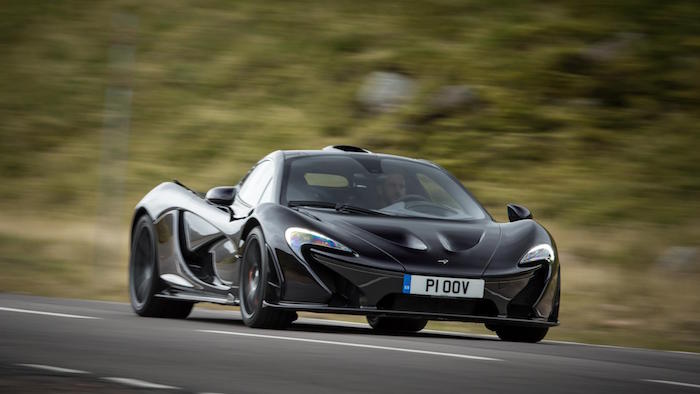 It has a reputation, this thing. Like its fabled McLaren F1 antecedent, which I spent two outrageous days with last summer, the P1 is expressly not for the faint-hearted. Yes, it can run for 11km in electric mode, which is a cool party trick and future-proofs it from the gathering storm-clouds of city-wide bans on ICE.

But the e-motor is there primarily to fill in the holes in the torque curve that can afflict turbo engines, so whatever Sadiq Khan and his global equivalents intend to do to remedy our stricken air quality is neither here nor there. This is about walloping you upside the head in a way that very, very few cars in history have ever managed. 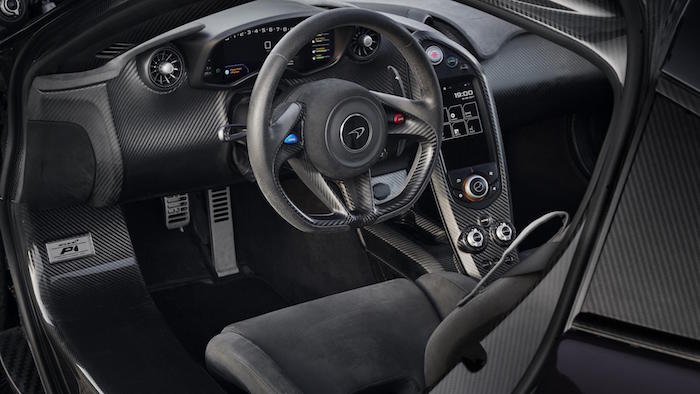 The company is set to retire its semi-legendary P1 OOV road test/demo car, and it’s been joined today by a newer car, P1 OOU.

Lots of famous bums have sat in its driving seat. Even my lamentable man maths quickly computes that a P1 is not a car you want to bin, or even scuff slightly. Two of McLaren’s top engineering guys – Dan Parry-Williams and Andy Palmer – are here to do a pre-flight familiarisation, and everyone shuffles about a bit in that semi-detached way that men sometimes do.

The ruthlessness with which this car has been engineered finds a perfect metaphor in how the doors close: there’s virtually no weight to them at all, so don’t slam them. Obviously that’s exactly what I do. One of the quirks of the car’s carbonfibre construction is that it feels feather-light yet unbelievably strong at the same time. 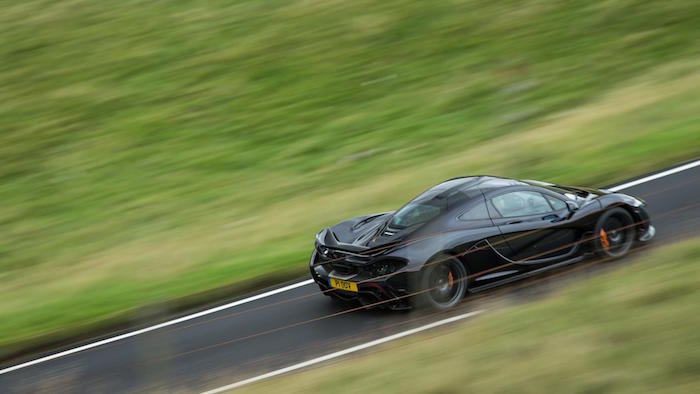 Wet roads are sub-optimal when you’re confronted with this thing, but it’s what we have as we inch away from our stately home HQ. Gravel pings like shards of metal off the car’s chassis and body. Dear God.

The P1’s interior is quite magnificently sparse, slivers of carbonfibre encasing minimal instrumentation. The occupants are also angled inwards ever so slightly, and nobody gets closer to delivering a genuinely cockpit feel than McLaren. The driving position is perfect, the view ahead almost panoramic. 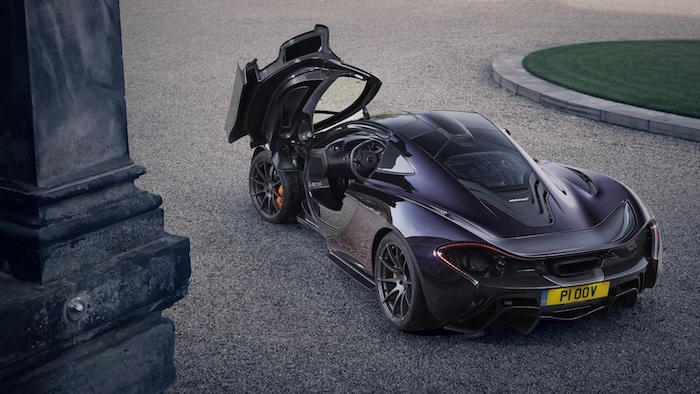 Parry-Williams also notes how much effort has gone into ensuring that the P1’s primary touchpoints are as stimulating and instant as possible. Even with two turbos, and a powertrain that has to harness and marshal an engine and electric motor’s combined power output of 903bhp, this is a car designed to be not just an extension of the driver, but to practically inhabit them. 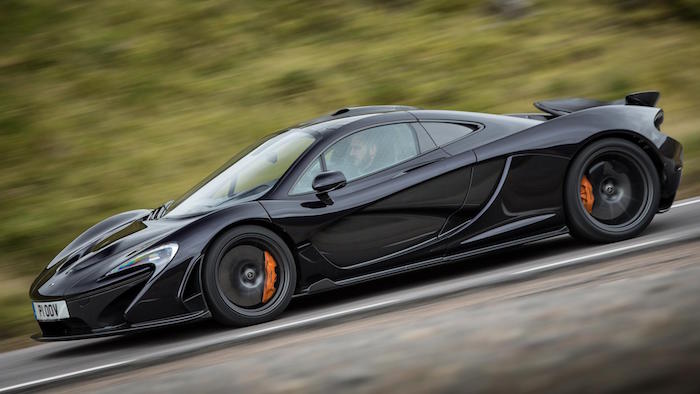 The P1 is primarily an exercise in minimalism. There’s no carpet or sound deadening. The windscreen is only 3.2mm thick, and weighs 3.2kg less than a conventional one. The roof glass is chemically toughened, and it’s only 2.4mm thick (more cockpit allusions here: the view up is fantastic, though you don’t want to see it too often, unless you’re in the passenger seat).

The P1 weighs 1,395kg dry, and its power-to-weight ratio is 647bhp-per-tonne. Astonishing to think that AMG and Aston Martin are both gunning for 1000bhp-per-tonne with Project One and Valkyrie… The P1’s aero set-up is so sophisticated it can generate up to 600kg of downforce and corner at 2g on a track. These are insane numbers for a road car on road-legal tyres. 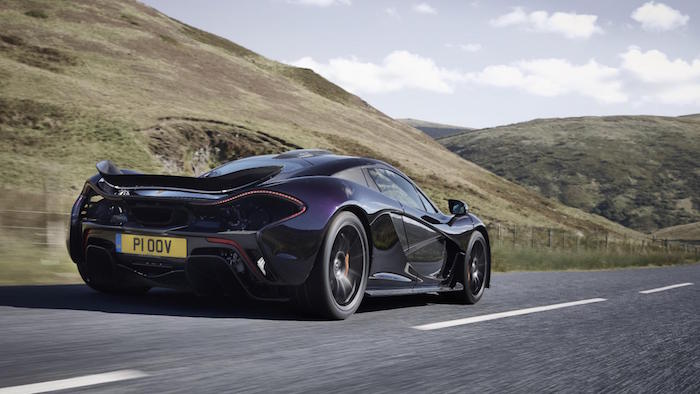 Clearly, it pays to start gently. Fiddle with the powertrain mode buttons – similar to 675 LT and 720S – to get us into manual mode: who wants to drive a P1 as an auto? What I notice first is the throttle pedal has a wonderfully long, linear travel.

The steering is somewhere beyond sublime. And thanks to McLaren’s RaceActive Chassis Control – independent control on all four wheels to decouple roll and heave stiffness and vary ride height – it rides the lumps and bumps of a Scottish B-road in a way that defies belief. Comfortable? You bet.

Yeah, right. Such is the bestial ferocity of the P1’s performance that it lures you in very swiftly indeed. Equally quickly, you realise that this isn’t a car you drive so much as come to some sort of pact with. The sort that makes clear that it’s in charge.

Although the LaFerrari has the perceived advantage of being normally aspirated, the P1 gathers momentum in a way I can honestly say I don’t think I’ve ever experienced before: the Chiron is close but obviously feels heavier, the Ford GT is awesome but not as savage, the Corvette Z06 is hellishly fast but cruder, the Pagani Huayra is somehow softer… 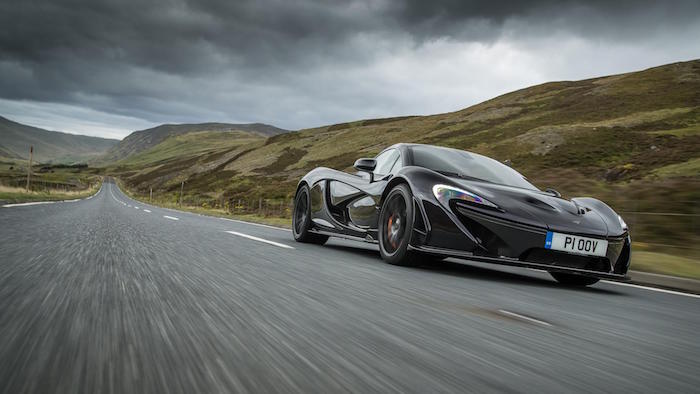 The P1 can reach 300km/h in 16.5secs , which is just a number on paper until you find yourself in the midst of that potential in the real world. It really doesn’t just accelerate, it bends space and time. It also does it to the most unusual blur of auditory effects, the turbos’ hurricane-force whooshing overlaid with the additional sci-fi sonics of the electric motor, set off against the old-school chumpfing, flatulent wastegate. Truly, no other car sounds like a McLaren P1.

And it’s capable of spinning its rear wheels in fifth gear at a speed that will momentarily rearrange your facial features into an expression you’re unlikely to wear very often. Not unless you’re in the habit of wrestling an alligator or facing down a charging rhino.

Seriously: wheelspin, in fifth gear. Yes, the surface is damp, but this tells you much of what you need to know about the P1. You’ve got to be very, very mindful. This is perhaps the single most thrilling car I’ve ever driven, a car that brings its absolute A-game on the understanding that you do, too. 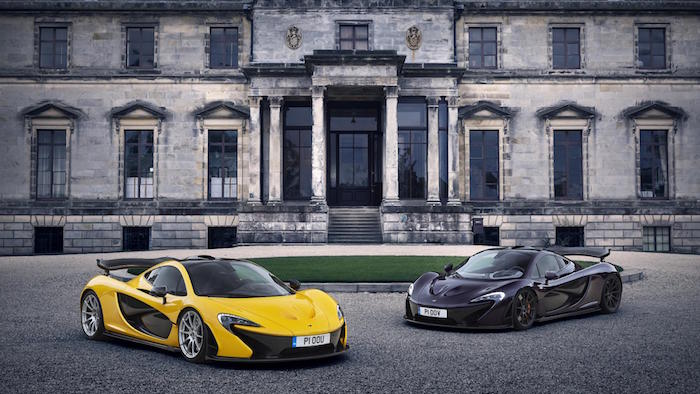 Which is one of the reasons I’d pop it into the number two slot of all-time heroes, alongside, yes, the McLaren F1. The Ferrari F40’s in the mix somewhere, too. The truth is, before I drove the P1 I didn’t totally get it.

The LaFerrari and Porsche 918, well they’re the pinnacle of what those two great companies can do, still, in 2017. Even with the F1 – the Sergeant Pepper’s or Dark Side Of The Moon of cars – in its back catalogue, the McLaren P1 seemed somehow a bit… previous. It’s not. It’s astonishing. Happy Birthday, P1. See you next year, eh. 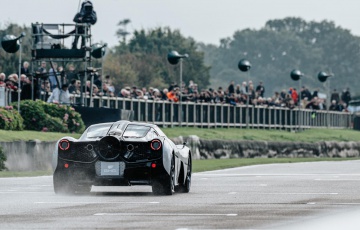 The GMA T.50 made its public debut at Goodwood Members’ Meeting and its V12 was in fine voice…