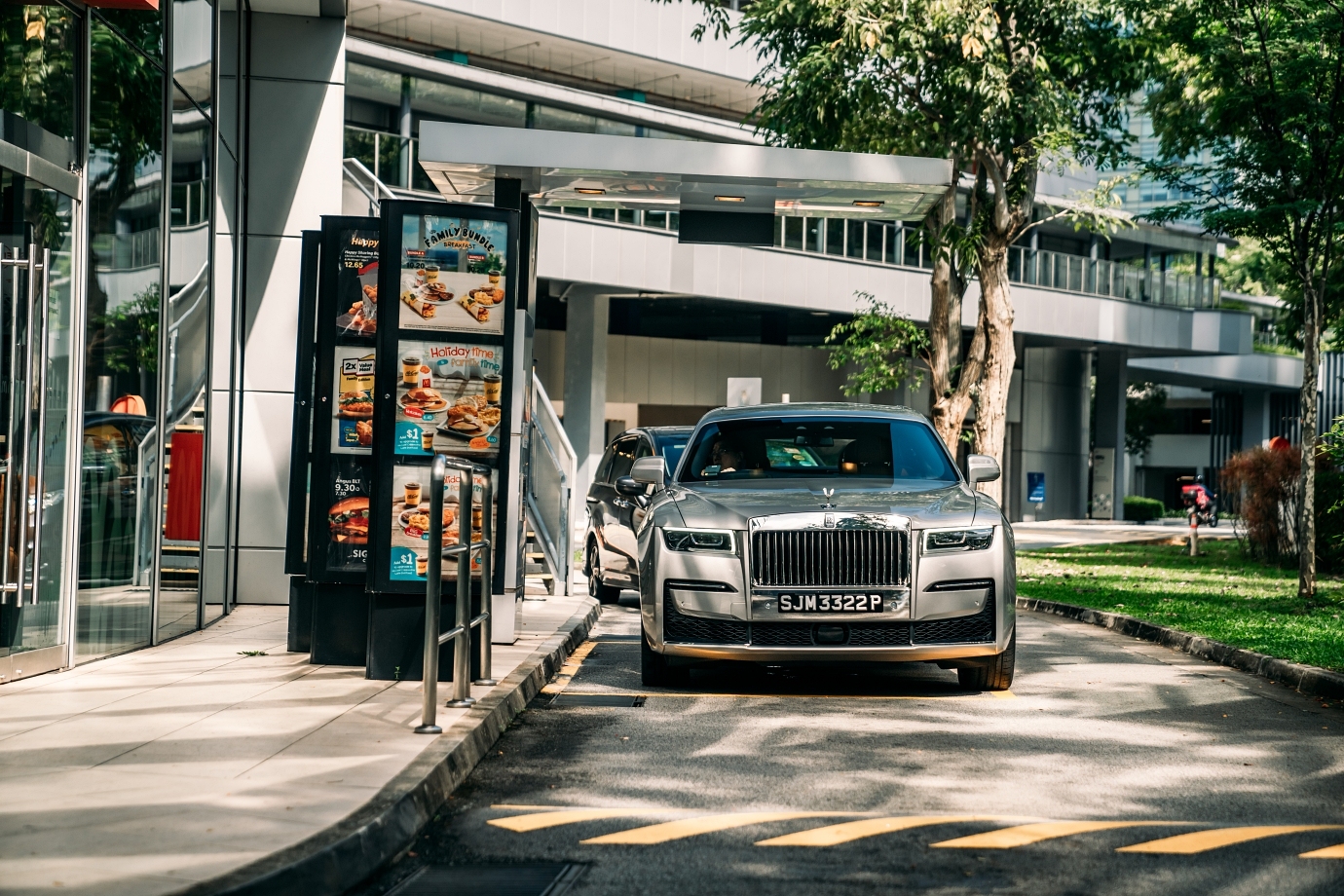 Singapore - Well, the whole Heightened Alert (or HA for short) has thrown us a curveball, a real spanner in the works of the entire recovery process.

Not quite the Circuit Breaker quasi-lockdown of 2020 when COVID-19 first erupted, one of the HA measures includes a restriction in the number of people you can socially mingle with (it's down from eight to just the two in case you're wondering).

Until the HA ends on June 13 (fingers crossed of course!), it's back to Oddle delivery, tarpow, eating in a public space, or our preferred mode, 'taking cover' in a car to grab a bite on the go, especially since the nature of our job sees us always on the go, and in many different cars. 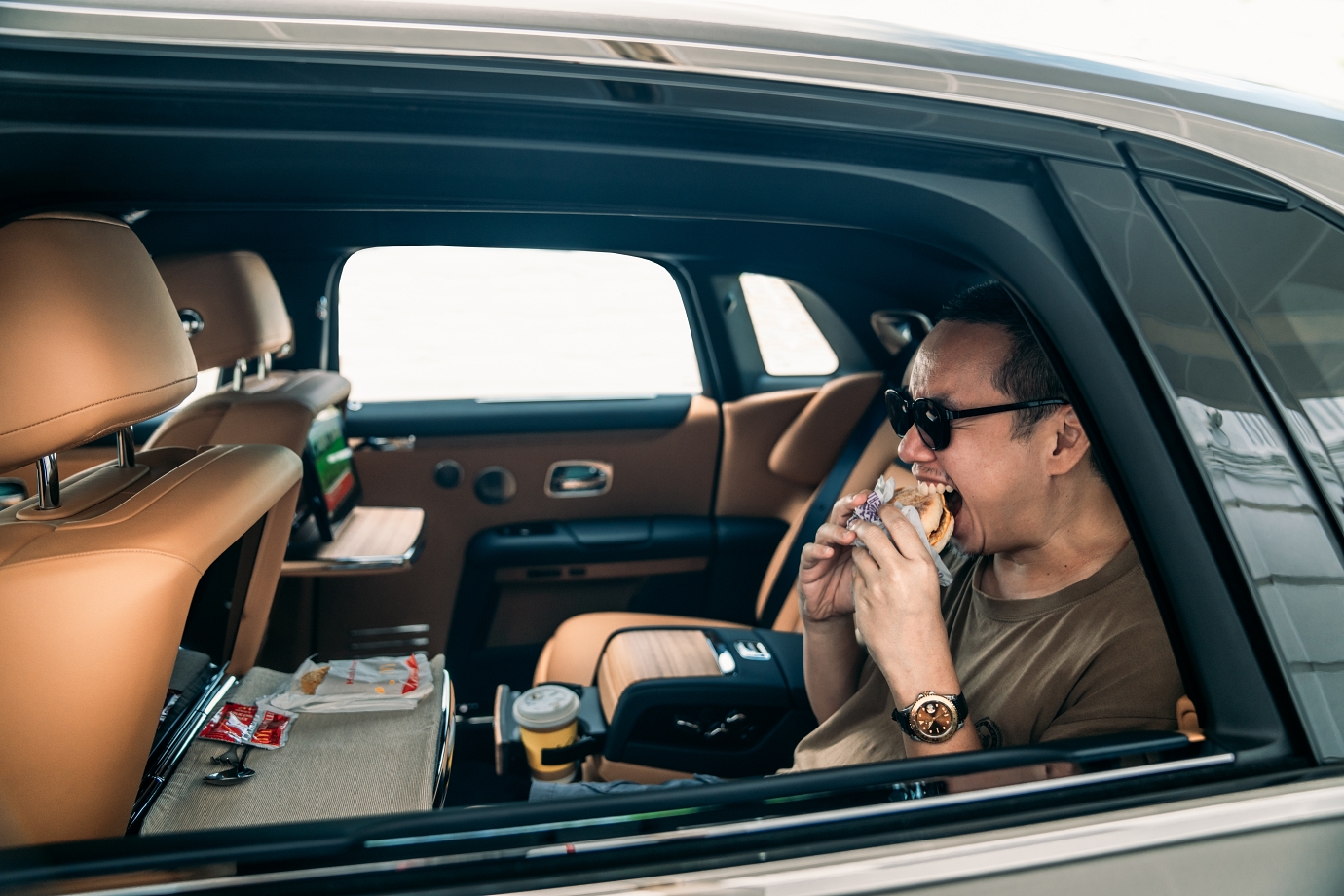 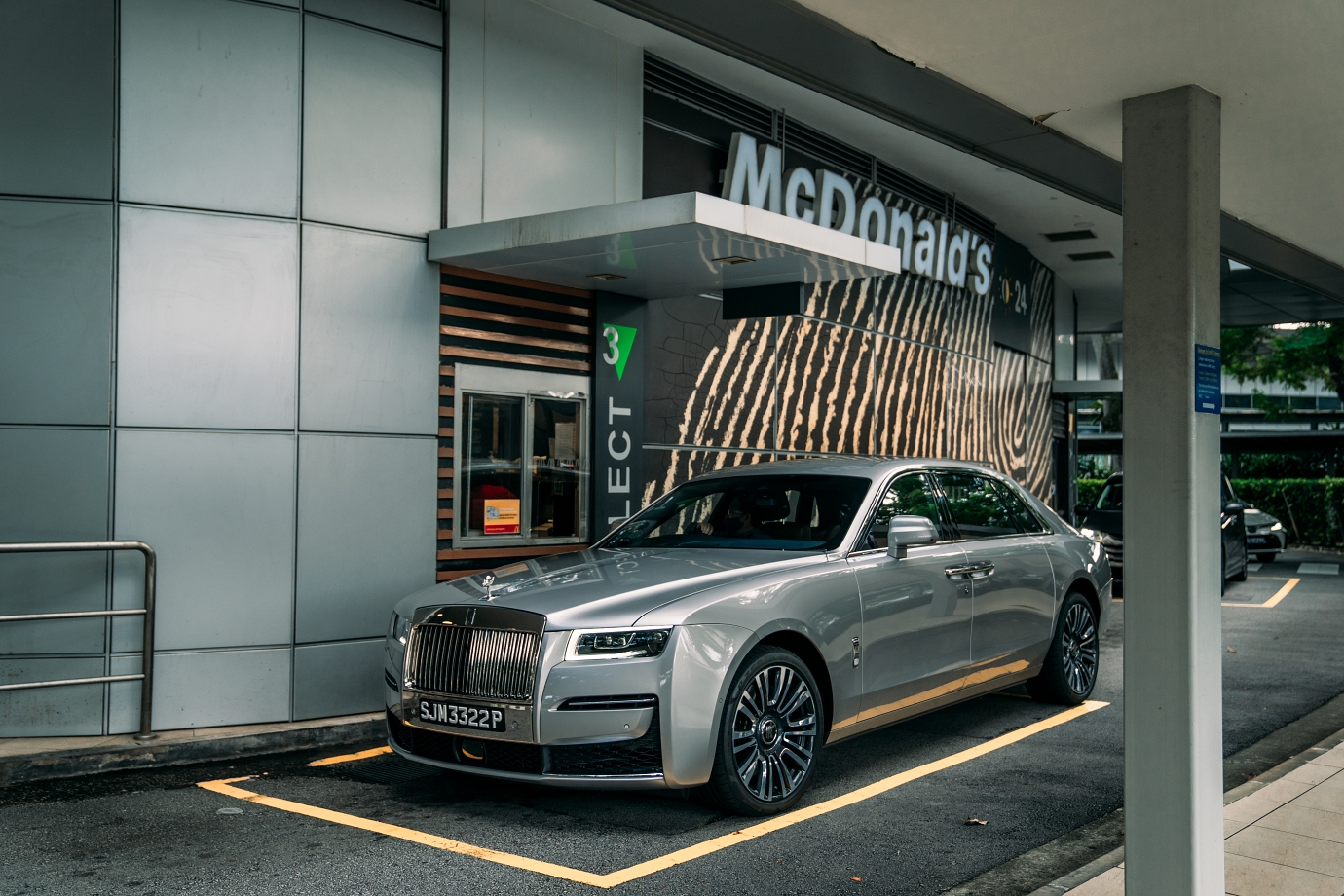 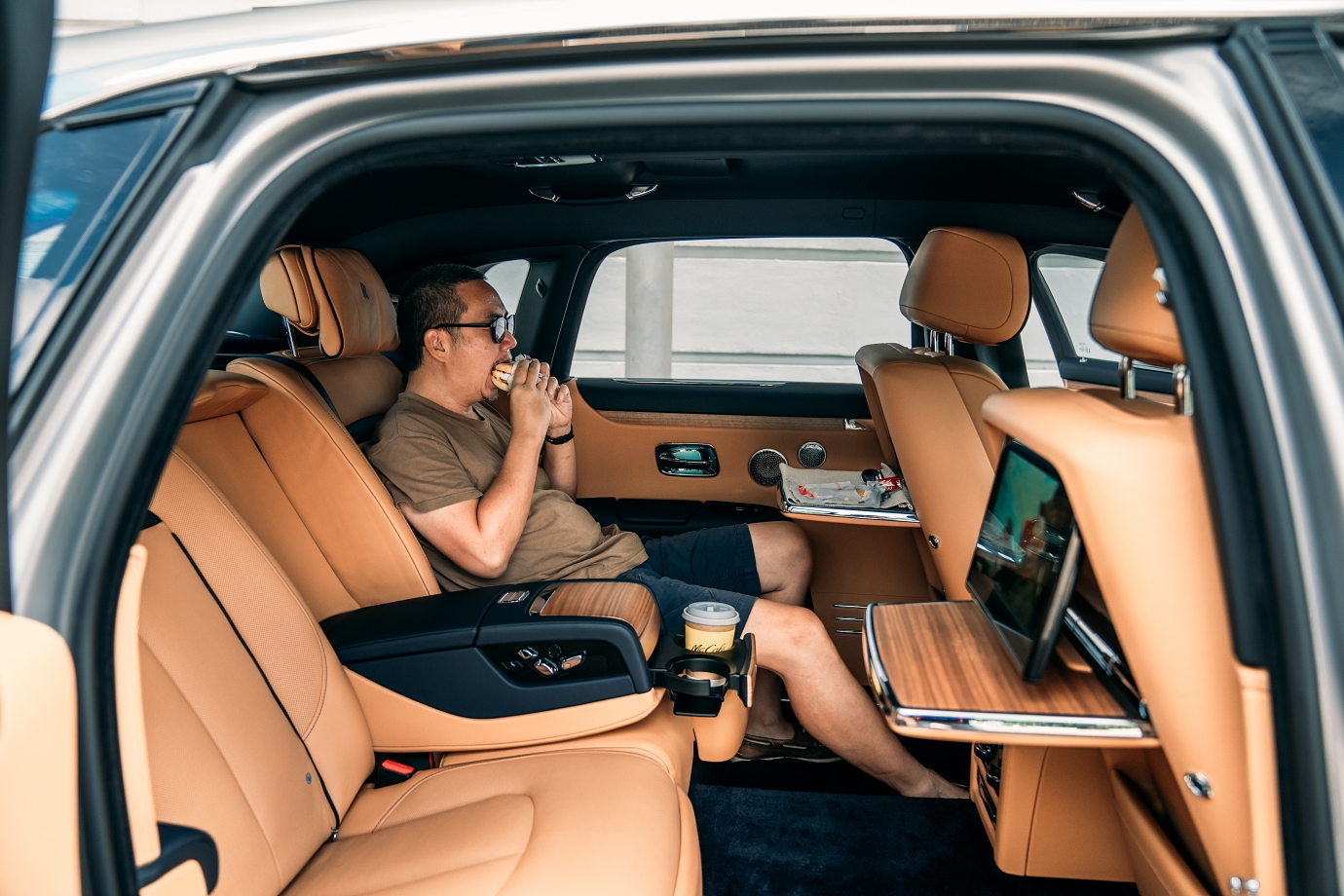 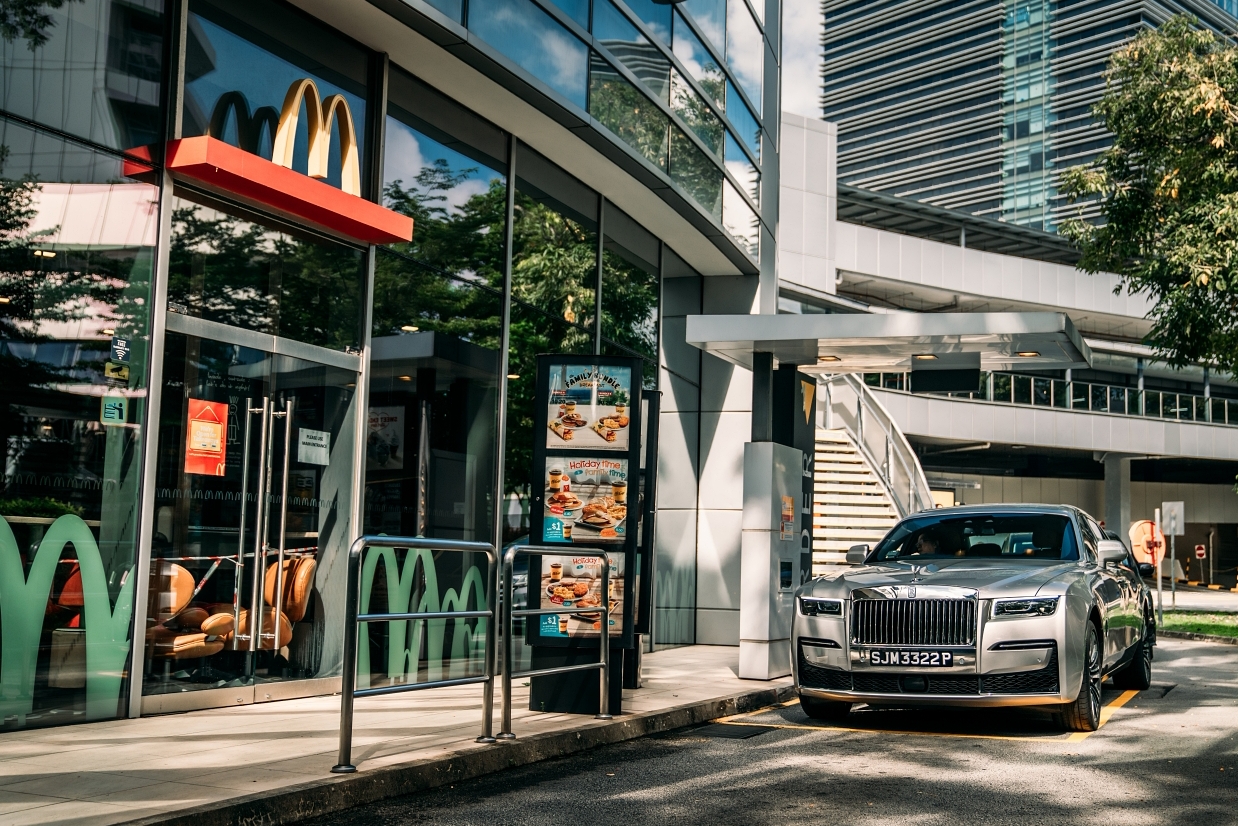 Lux-limos like the S-Class, A8 and 7 Series right up to the new Ghost ultra-lux limo are proud to proclaim how engaging they are as driver's cars, but do we really need the designated driver to have a good time?

Up to the Audi/BMW/Merc level possibly, and maybe even standard wheelbase Ghost/Cullinan/Wraith/Dawn territory, but if you're deep in Ghost Extended or Phantom waters, the only right place to be is in the back.

Sure, it might be owner driven the one occasion out of every twenty trips, but if the owner really wanted a fun drive, there are probably sportier cars in the garage that require his/her ministrations.

We're out in the Ghost Extended when the craving for a Mc-meal strikes.

For what's it's worth, I've been off MaccaD's for almost three years, and so we trundled into the McDonald's drive-through, much to the bemusement of the crew.

It didn't help that our pal and designated driver was really hamming it up with the "Sir this/ Sir that" and how the "boss says he'll fire me if I don't get him his honey dip!"

It was certainly a treat to be nicely ensconced in the Ghost's plumply padded rear seats (compared to my own car's snug Recaros) as I tucked into the Happy Meal, with Captain America playing on the 12-inch screen in full surround sound glory.

There are certainly worse ways to spend a morning, and even though it's been some days since our ride in the Ghost, it's still haunting me! 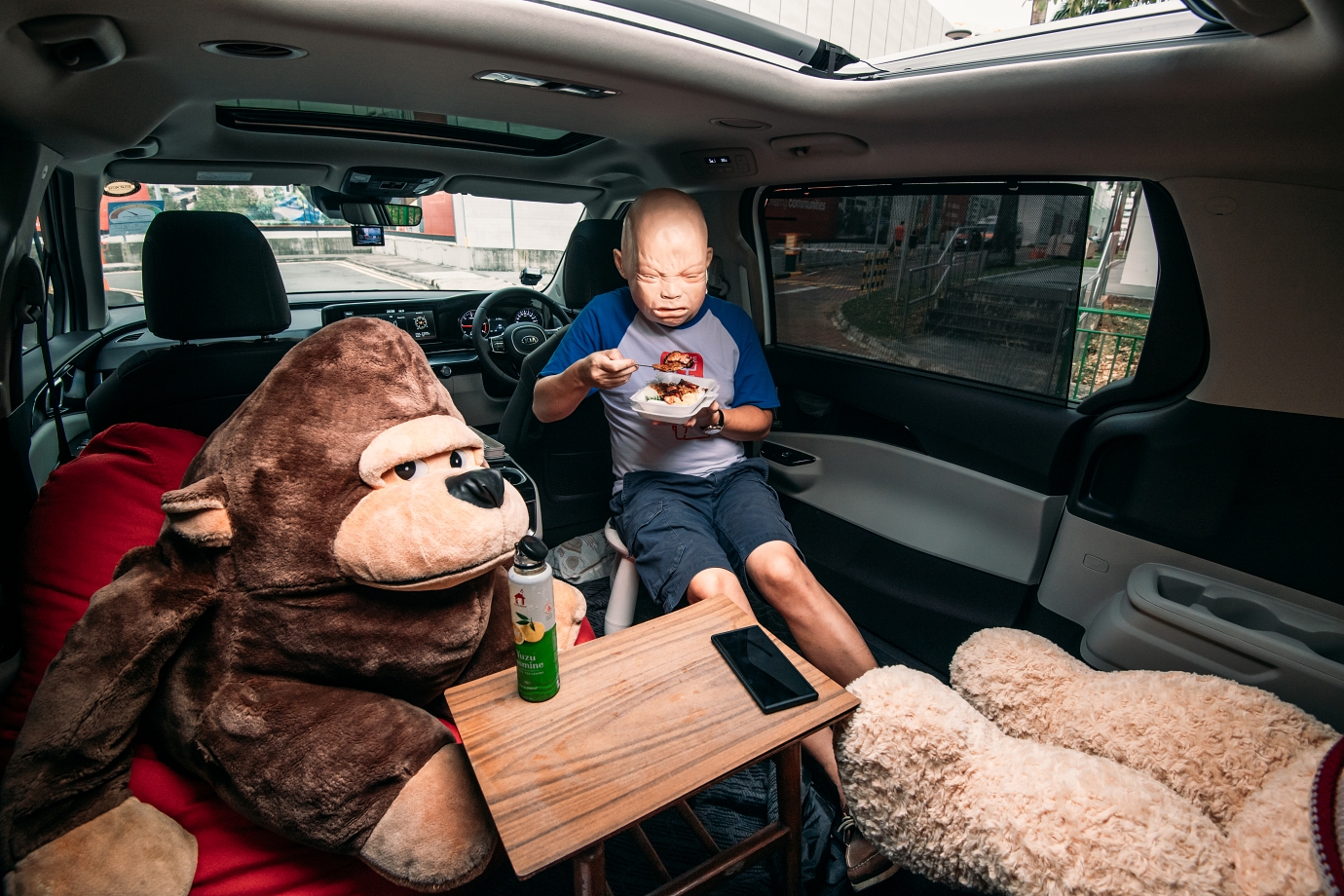 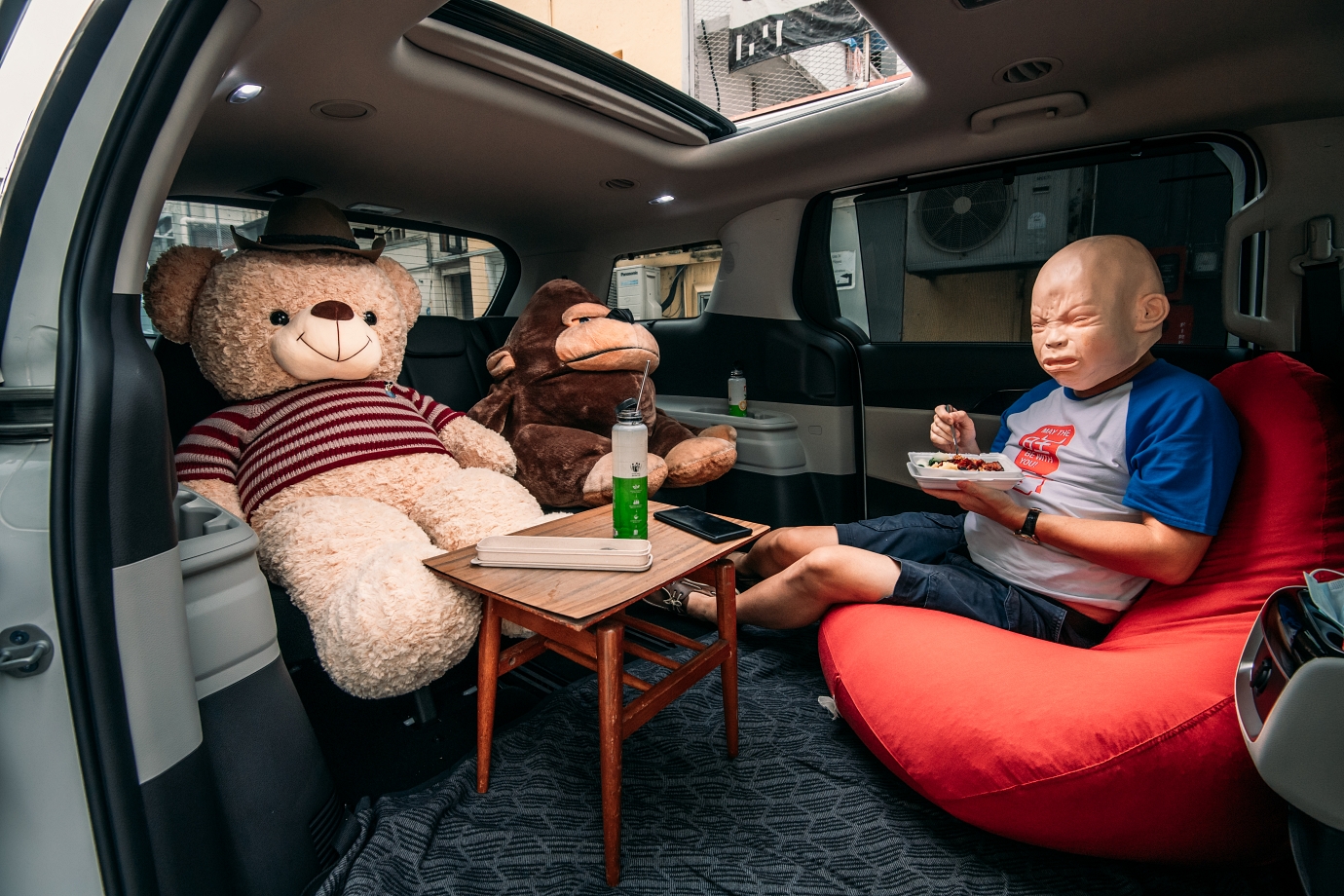 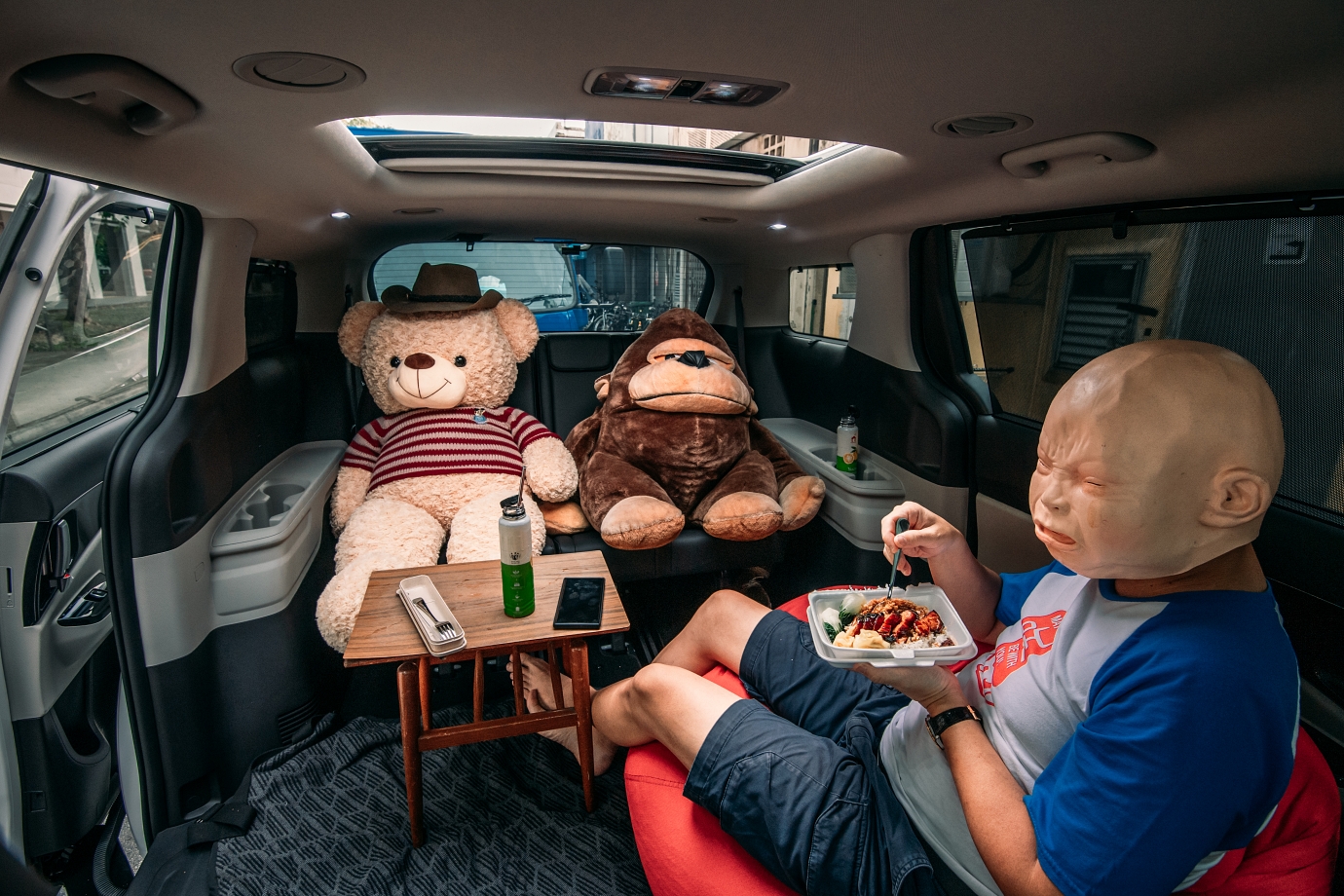 If you haven't seen the latest 2021 Kia Carnival yet, check it out HERE. It's a fabulously unpretentious MPV (Kia calls it a Grand Utility Vehicle) that packs a mega-punch in terms of packaging, as opposed to performance, nttawwt of course.

This is one of the most fashionable anti-fashion MPVs we've seen in a long, long time, and if we had to pick out one flaw, it would have to be its 'brutalist' honesty. Why? The Carnival never pretends to be something it's not, and we like how Kia is calling a spade a spade.

Couple this to the fact it's powered by our fave turbodiesel 2.2-litre, which boasts big range and big torque for wafting, the Carnival is unapologetically anti-establishment and un-PC, and will appeal to the folks who don't give a whit about the latest in four-wheeled fashion, or one of the many compromised quasi-MPVs around that ends up not doing anything well...

Look at its eminently functional form: there's some concession to aesthetics, but the Mega-Purpose-Vehicle is mostly chunky right-angles and square-cut visuals, which mean a cavernous cabin that can be comfortably enjoyed in either seven- (with second-row captain's seats) or eight-seat configurations.

In true OG MPV fashion, the seats can be completely pulled-out to free-up even more space for load-lugging needs. We configured it with the second-row removed and filled it with three chunky monkeys to demonstrate the versatility of its cabin area.

We figured it would be easier explaining the plushies than having to explain ourselves to the internet horde when some out-of-context photo taken by one of the many busybodies around makes it to social media with four or five warm bodies in the car.

Raise the window-blinds for privacy and keep the glass-roof open for fresh air and light and you're good to eat-on-the-go, catch a cat-nap or anything else that might help kill some time.

As far as we're concerned, the Kia Carnival ticks all the major boxes for anyone looking for a purpose-built carrier of pets, people or packages. 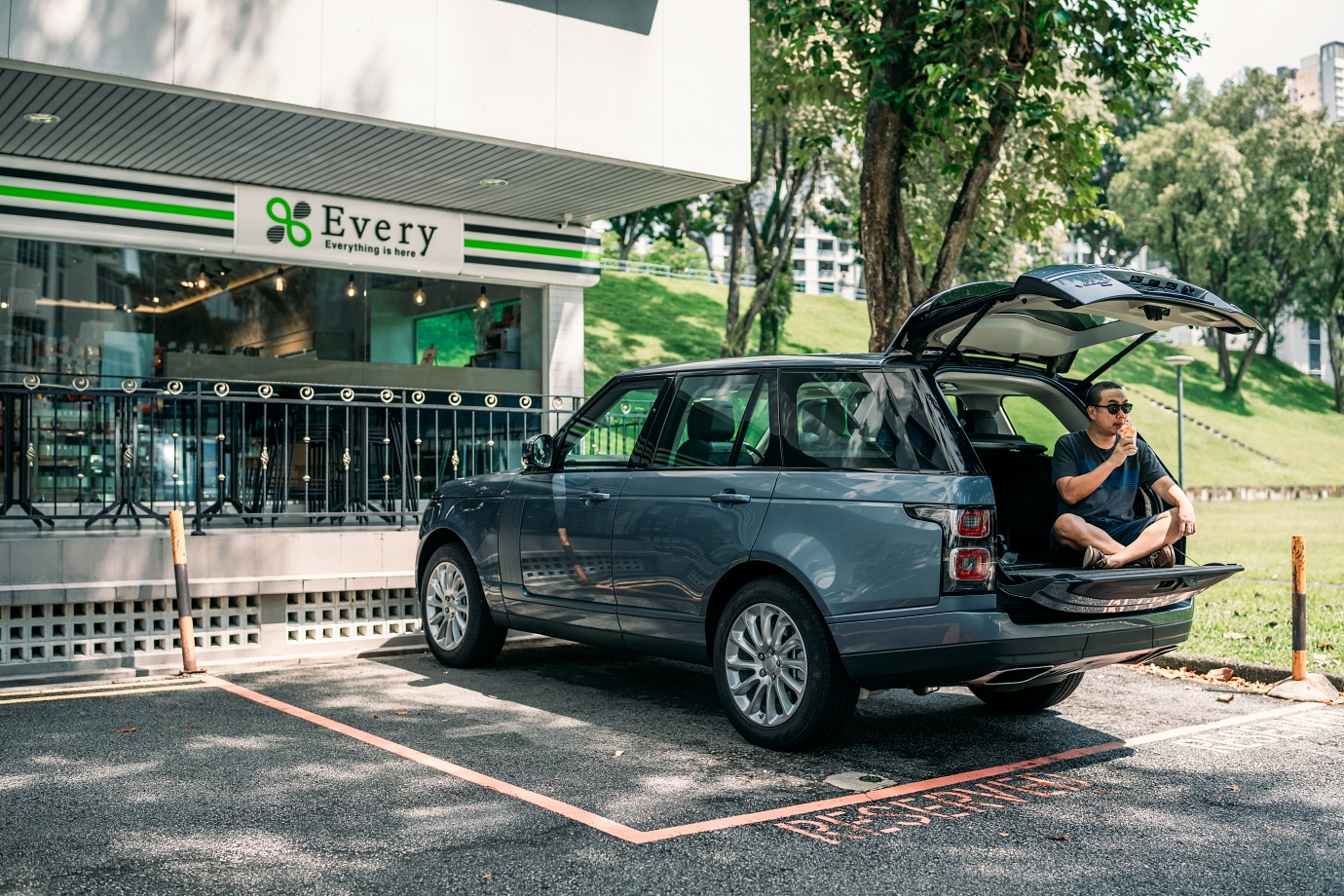 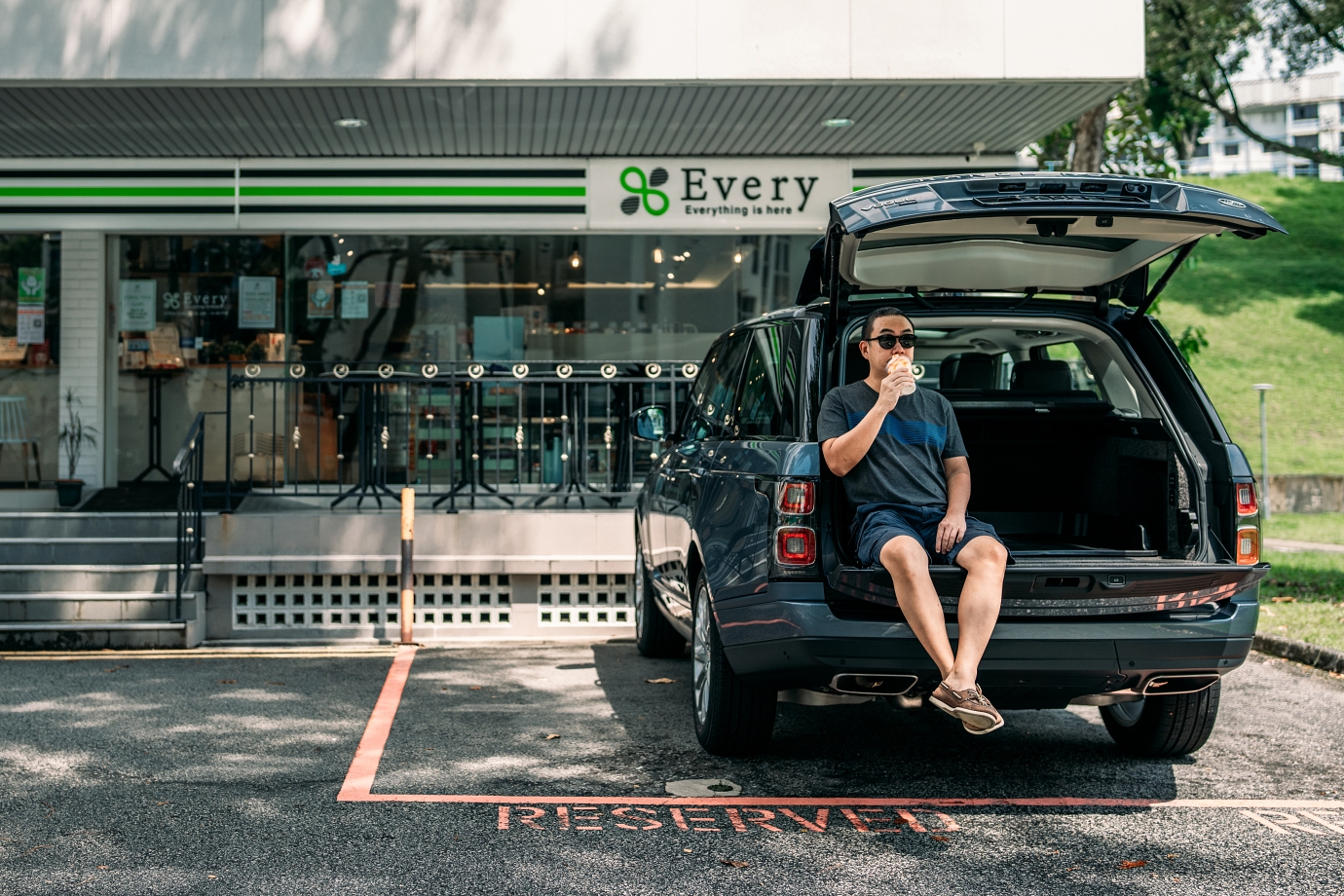 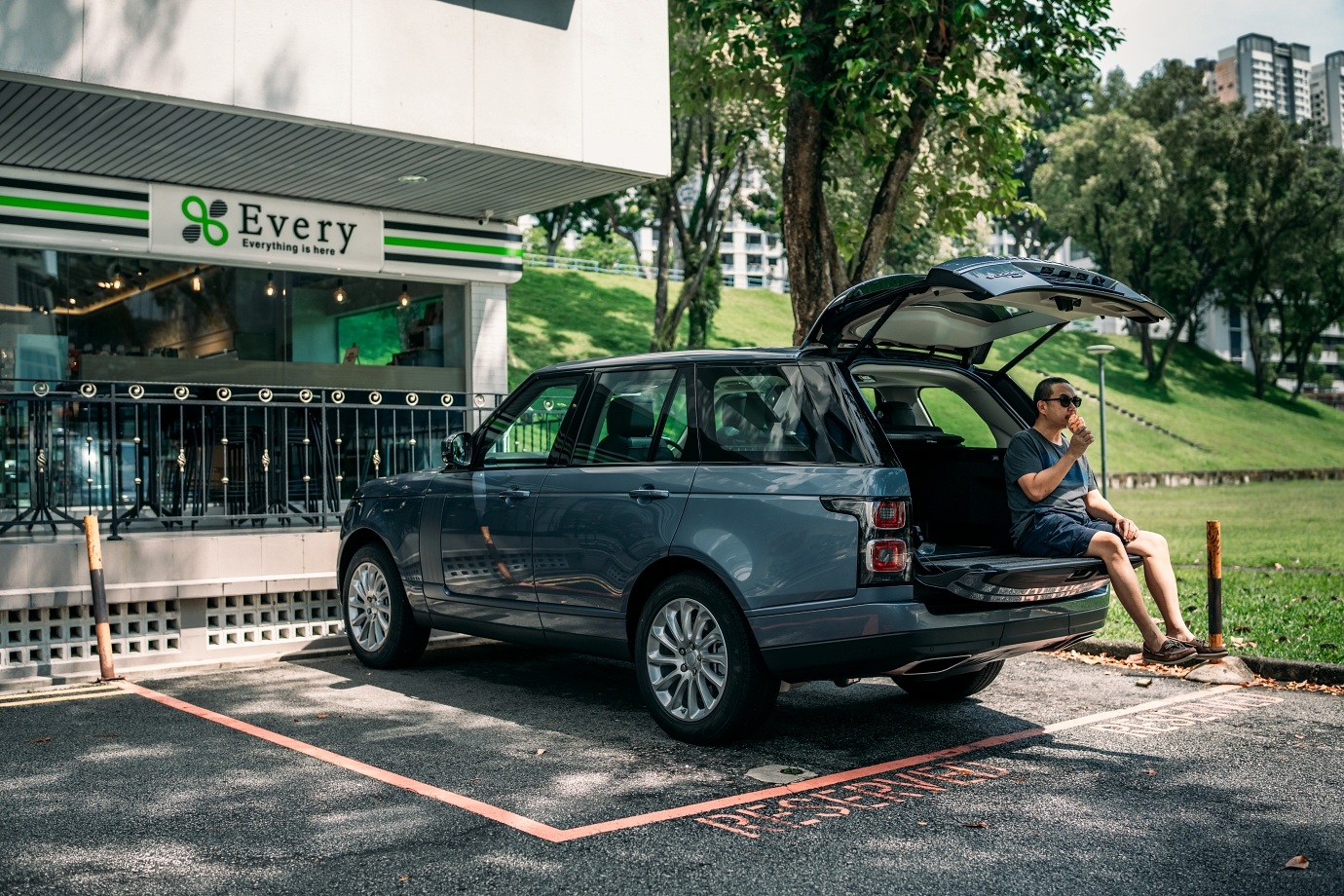 To us, the hulking Vogue is the definitive Range Rover.

Sure there are smaller, more accessible offerings from the brand (yes, we're looking at you Evoque), but as far as we're concerned, the full-sized Vogue defines the 'range' (no pun intended!).

Moreover, the go-everywhere Vogue makes a compelling, off-the-beaten-path alternative to folks who want a change from the usual (and rather predictable) luxury limos in the 7 Series, A8, S-Class segment.

(Click HERE to read about our Drive of the Range Rover Vogue 3.0 MHEV P400 Autobiography for our COTY feature)

Very little fazes the Vogue, and you'll also realise that traffic in front magically melts away as the intimidating sight of the full-fat Rangie bearing down on them forces them to scurry to safer lanes.

There's an implacable sense of inevitability to its progress, much like the way an iceberg bears down on a ship – its pace may be glacial, but you recognise this is something you make way for...

We felt like something ice-cold on that hot, hot day, so popped over to our regular Japanese convenience store to pick up a soft-serve.

Faced with the prospect of a sticky mess in the Vogue's cup-holder, it was easier to pop the dual-opening tail-gate at its doorstep to enjoy the cone under the shade of the tree canopy. This is the ultimate maxi-MINI, with plenty of poke and smart packaging to turn it into a capable runabout for singletons and fledgling families alike.

Ever felt like just lounging around the car for a quick kopi while enjoying the view or before your drink loses too much heat?

A nifty fold-out padded seat unfurls from the Countryman's boot area for just this purpose, although of course you could also use it to change into/out of running shoes, or whatever have you.

However, given we aren't allowed to have coffee at one of our regular spots (under the HA measures), we parked just outside the cafe to enjoy the lush piccolo latte before it had time to get cold.