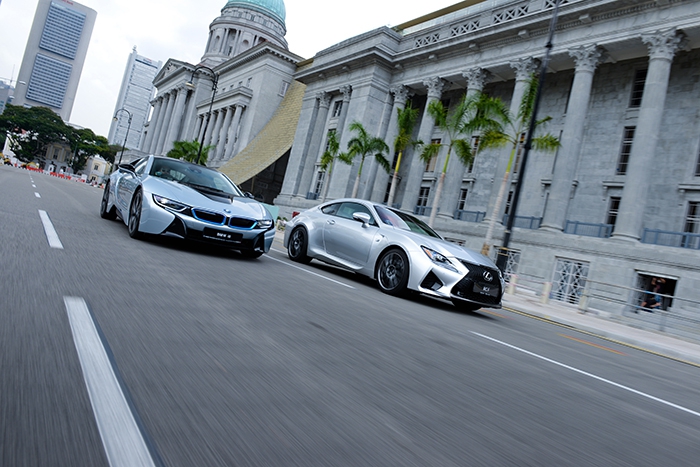 SINGAPORE – Performance used to be the main defining quality that separated boy toys from real sportscars.

These days, things are a lot more ambiguous, since any turbo’d hatchback worth its weight in boost can keep up with far more exotic (and expensive) machines.

If we could collect a dollar for each occasion we’re told somebody’s R/Turbo/GTI/whatever/blah can keep up with a proper sportscar, we’d have bought ourselves one by now… and mind you, that’s the one sportscar, not the ‘whatevers’, since as everyone knows (or should know!), there’s more to sportscars than pure performance alone. With strict emissions regulations killing off the jolly, big-hearted naturally-aspirated sportscars, turbo’d performance has become the norm rather than the exception these days.

Look no further than the M3/M4 and latest C 63 (again, why continue to call it ‘63’ if it’s no longer powered by a 6-litre anything these days?) to see how the past bastions of the sports executive segment have now capitulated to the green regime.

As you can imagine, it’s a rare occurrence these days to encounter something of the high-revving, nat-asp variety, which makes the Lexus RC F a bit of a welcome novelty. With so many sportscars going turbocharged, BMW takes a slightly different approach with its i8 ‘progressive sportscar’, which sees a 1.5-litre three-cylinder mated to an electric motor.

Now, we were immediate, huge fans of the fully-electric i3, which was one of our Star Cars of 2014, but we’ve taken a little longer to warm-up to the i8, which seems to have more ‘show’ than ‘go’, especially with its fancy, traffic-stopping dihedral doors. Even at the worst of times, we like to think we’re fecklessly half-full types, but when it came to both the RC F and i8, we found ourselves constantly comparing them to what we felt were their rightful rivals and how the two came up lacking; this meant AMG and M for the RC F, and the F Type, 911 and R8 for the i8 – in fact, I’d bet my bottom dollar this list isn’t far-off from the cars you and many other enthusiasts are thinking of too…

Taking a step back, we realise we’d been blindsiding ourselves in a half-empty fashion more typical of the close-minded, and this latter is a condition car hacks should never be afflicted with.

After all, it should be more about what these cars have, than what they don’t-have, which brings us back again to the topic of sportscars – we use the term ‘sportscars’ to distinguish such performance cars from their more exotic supercar peers, since there’s far more to any supercar than just fancy doors and a sexy shape. 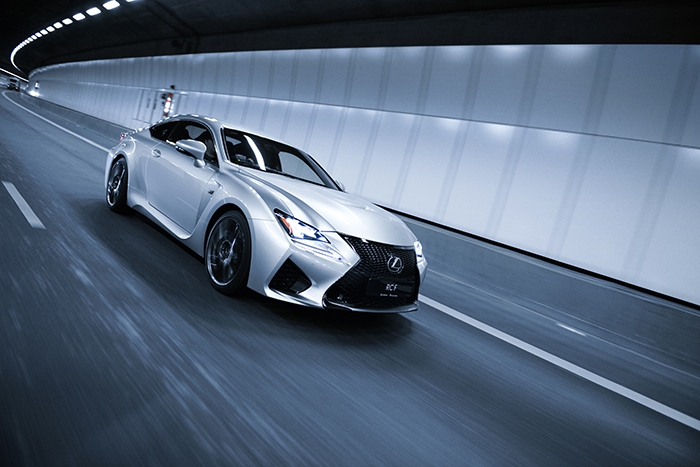 We've been big fans of Lexus' F models ever since the IS F (and the more abstract LFA) arrived in Singapore.

There's something delightfully incongruous about Lexus' sports sedan and its rambunctiously shouty naturally-aspirated V8 that hit all the right notes with us.

In our minds, the understatement of the IS F was a striking counterpoint to the more predictable Teutonic trio at the time, which comprised M3 sedan, RS 4 and C 63 AMG.

(Click HERE to read about the legendary LFA in our JDM special!) Even though today's demo RC F is not in the ubiquitous electric blue, we find the sonic silver a subtle choice since its molten finish shows off every jagged little edge and nuanced contour of its shape, especially with the flared arches of the F. 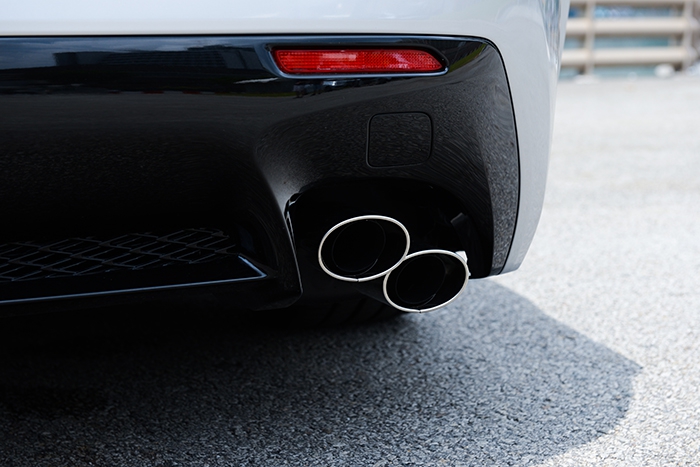 Like the IS F, the RC F features very distinctive twin stacked quad tailpipes that protrude rather belligerently from the back.

It has the sort of looks that evoke a double-take only if you recognise it for what it is and you begin to pick out all the details that make it a ‘F’; otherwise it can be the very soul of discretion that passes quietly below many radars, unlike for instance the instant neck-snapping responses evoked by the i8. 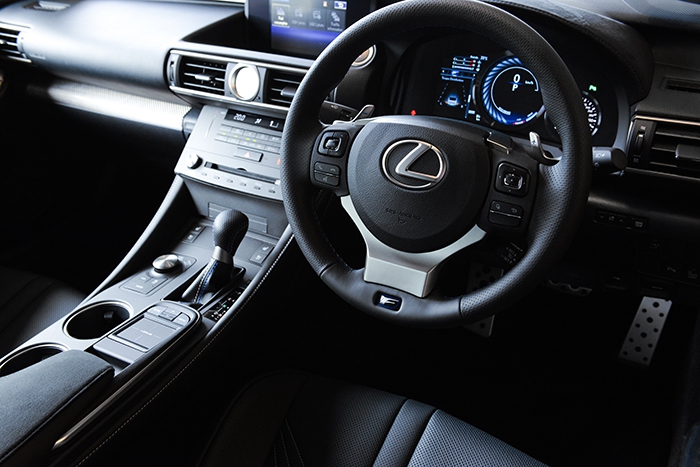 The cabin is well-appointed, with the gorgeous front high-backed sports seats offering fantastic support when the going gets fast.

We’re not terribly fond of the user and graphics interface of the central operating system, but thankfully, it’s possible to get the most out of the car without mucking about with the trackpad. 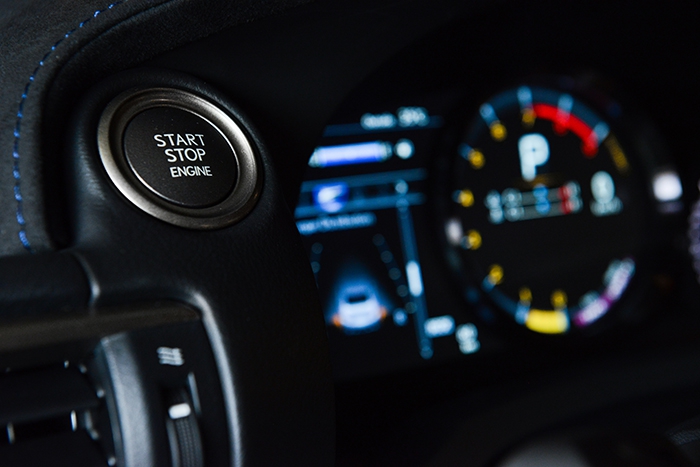 After some time spent with the local Lexus reps, we’ve come to understand the brand a little deeper – Lexus is not in the business of filling niches for the sake of it, especially if it means any sort of adverse compromise to the ownership experience.

In case you haven’t realised, Lexus isn’t the sort of brand that will estrange its existing owners in the interests of sales volume and if there are some things that every owner is practically guaranteed of, it’s the legendary Lexus service hospitality and driving experience. 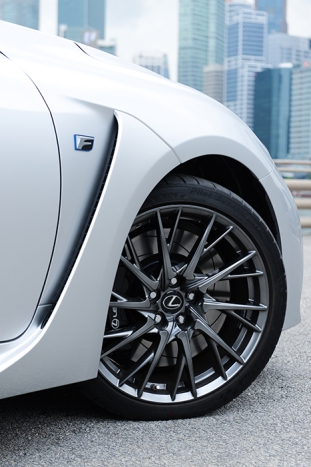 By that token, the RC F moves with a measured gravitas, and it’s perfectly possible of being driven around sedately if needed, since there are quite a few facets to its personality – including the sort you wouldn’t want to bring home to mommy!

Despite its 4705 x 1845 x 1390mm (LxBxH) dimensions, the steering is a twiddle to fiddle and piloting it around isn’t as daunting a prospect as it seems once you get used to its prominent bonnet bulge. Also, in spite of its sporty credentials, the ride is never harsh, as the RC F’s damping lends itself well to both daily commutes, as well as possesses the sharp reactions required for dynamic driving. 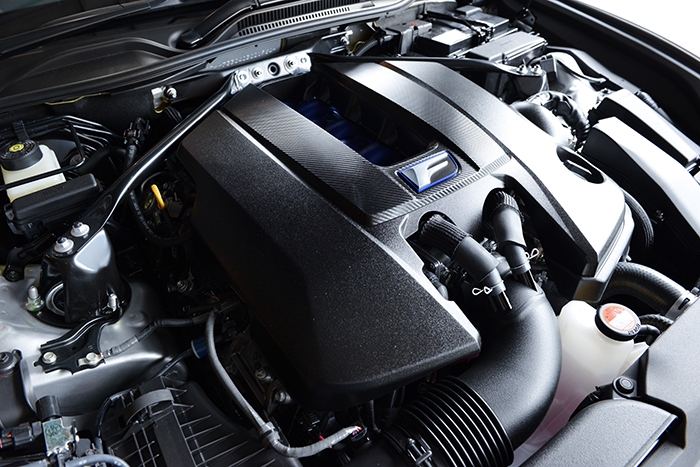 Put your foot down and the RC F’s personality goes from relaxed to rabid as the needle arcs past 5000rpm and the V8’s legion of banshees is unleashed to explosive and deliciously addictive effect.

Don’t forget there’s 1.8-tonnes to shift, so the 4.5secs sprint from nought to 100km/h is commendable, especially from an engine so pure and unadulterated by forced induction. The RC F is one of those cars you're happy to keep on-the-boil to be able to tap into its performance, like the old VTEC sportscars of yore.

This takes commitment and strategy, or in other words, thinking, about how you’re driving instead of turning-off your mind the way you would these days when you get into many of today's crop of fast cars. The combination of limited slip differential and different TVD (Torque Vectoring Differential) modes makes for surprisingly playful and agile handling, while the 8spd auto can serve up shifts that can be as swift or as slurred as you like, so you’ll never wish it were a dual-clutch gearbox.

Despite its penchant for fun, the RC F will never lead you astray, since the electronics are always waiting to intervene when things get overly out of hand! The i8 is as flamboyant as the RC F is understated, especially with its dihedral doors and futuristic styling.

The silhouette of BMW’s hybrid sportscar is pure sci-fi, and when we’re following behind in the RC F, we can’t help but see the Decepticon glowering at us as the i8 pulls briskly away. 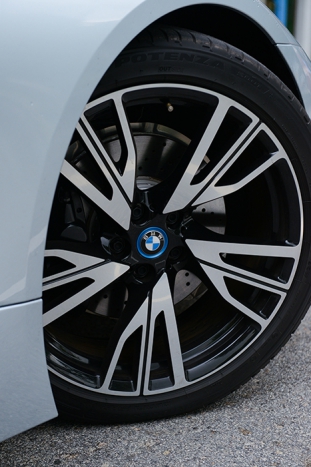 The i8 is the holistic combination of weight-loss (to compensate for the weight of the electric hardware) and a perky hybrid powerplant.

The former is achieved through the extensive use of composites and a full-carbonfibre Life module – a trait the i8 shares with more exotic and expensive supercars – while the latter sees a 96kW motor boosting the performance of the turbo’d 1.5-litre three-cylinder. 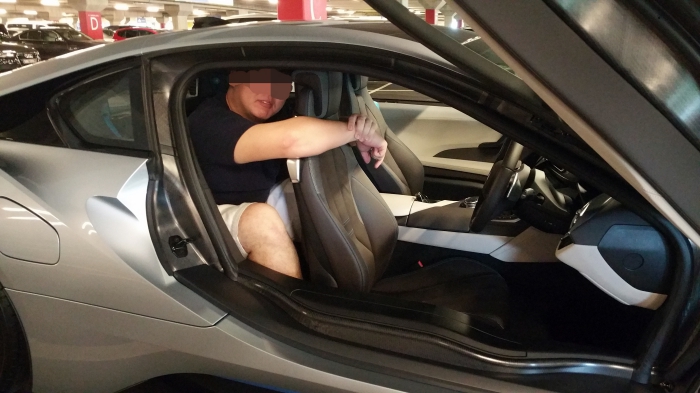 i8's holistic approach to performance also extends to rear passengers – best to be lean and lightweight!

There’s a lot of drama associated with the i8, especially with its exaggerated wedge-shape and doors that defiantly punch the air when open, so no one can deny its aesthetic appeal – it really snares you with its ‘show’ even before you worry about the ‘go’.

You buy a car like the i8 to make a visual statement; like the RC F, we daresay it looks like nothing else – the looks you get from everyone including pedestrians and other sportscar drivers more than make up for the initial acclimatisation period for ingress/egress! Instead of the almighty eruption to life typical of this class, the i8 awakens with a chime and whirr of electronics when you hit the starter button, which already sets the sound stage for the drive.

Like the i3, there’s a full-electric E-drive mode, which lets you cruise on battery power alone at speeds of up to about 120km/h, for a range of about 30+km. 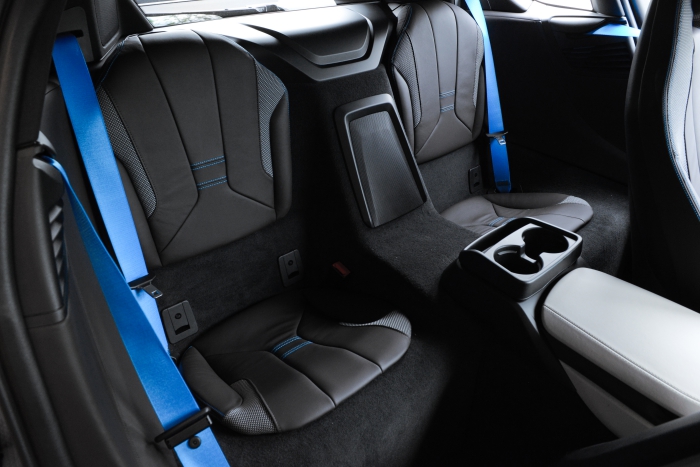 Although the fuel consumption isn’t a concern for the folks buying these cars (versus the i3 segment), we should also add that the i8 averages 2.1l/100km; for a car that dispatches the century sprint in under 4.5secs, that’s almost preposterous! Coasting around town in full-electric, there’s the same sort of eerie silence as in the i3, only the i8 has the petrol-engine in the wings, just waiting to unleash its stuff.

This also means you have instant access to the electric torque of 250Nm, which is available the moment you get on the gas pedal, even from standing starts. Despite its eco-friendly credentials, we’re not here to pussyfoot the car around. Shift the transmission to ‘Sport’ when the red mist descends and this silver bullet can be driven around with the sort of performance that accompanies its looks and so-sharp-it-cuts silhouette.

Also, with 250Nm always ready to go from 0rpm, there’s no lag of any sort before the engine kicks in for a second shot of ‘go’.

Even then, the standing-start performance isn’t where it’s at, because the i8’s rolling-start times are as impressive, with 80-120km/h in 4th gear dispatched in just 3.4secs (5th gear sees 4secs, or as long as it takes you so say “easy peasy pudding pie!”), which is right smack in supercar territory. Unlike past EV sportscars, and the Tesla Roadster is one that comes to mind, the i8’s chassis balance feels perfectly sorted, thanks to the fact that the architecture and construction has been specifically designed for the BMW i family to cope with the position and weight of the electric hardware – as opposed to just a retrofit job. The i8 is part of a new dawn of ‘thinking’ sportscars, which blends the visual and dynamic performance that fans of the genre are enticed by with a healthy dose of eco-consciousness. 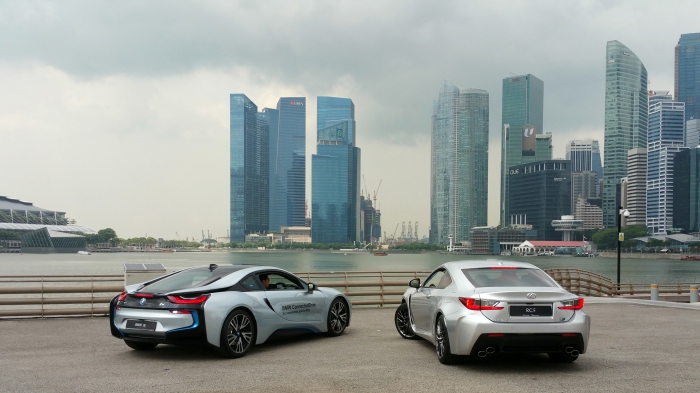 The flash factor of this dynamic duo look the part and they have ample – albeit not excessive – firepower to back it up, but that's perfectly fine for their owners who aren’t looking for anything more ‘dangerous’.

In a pinch (and it can be a tight one!), the pair will fit two in the back and they can be daily driven comfortably to practically everywhere in Singapore, multi-storey carparks included.

To our minds, the RC F and i8 find homes in Singapore precisely because they are not too fast or too furious like their peers, and it’s not just about the prices either, since these cars operate in a segment where people have the money, and aren’t afraid to be different from their contemporaries with the base 911s, M3s and AMG what-nots.

Best of all, the i8 and RC F look like nothing else on our roads, which adds priceless, neck-snapping street-cred to one's ownership experience.

We reckon that, in today’s market, the two exploit intriguingly different aspects of the sportscar spectrum to breathe new life into the term: thinking enthusiast’s sportscars. This feature first appeared in Top Gear Singapore #38 (May 2015) Borneo Motors, the authorised distributor for Lexus in Singapore, signs a three-year partnership agreement with the Singapore Golf Association