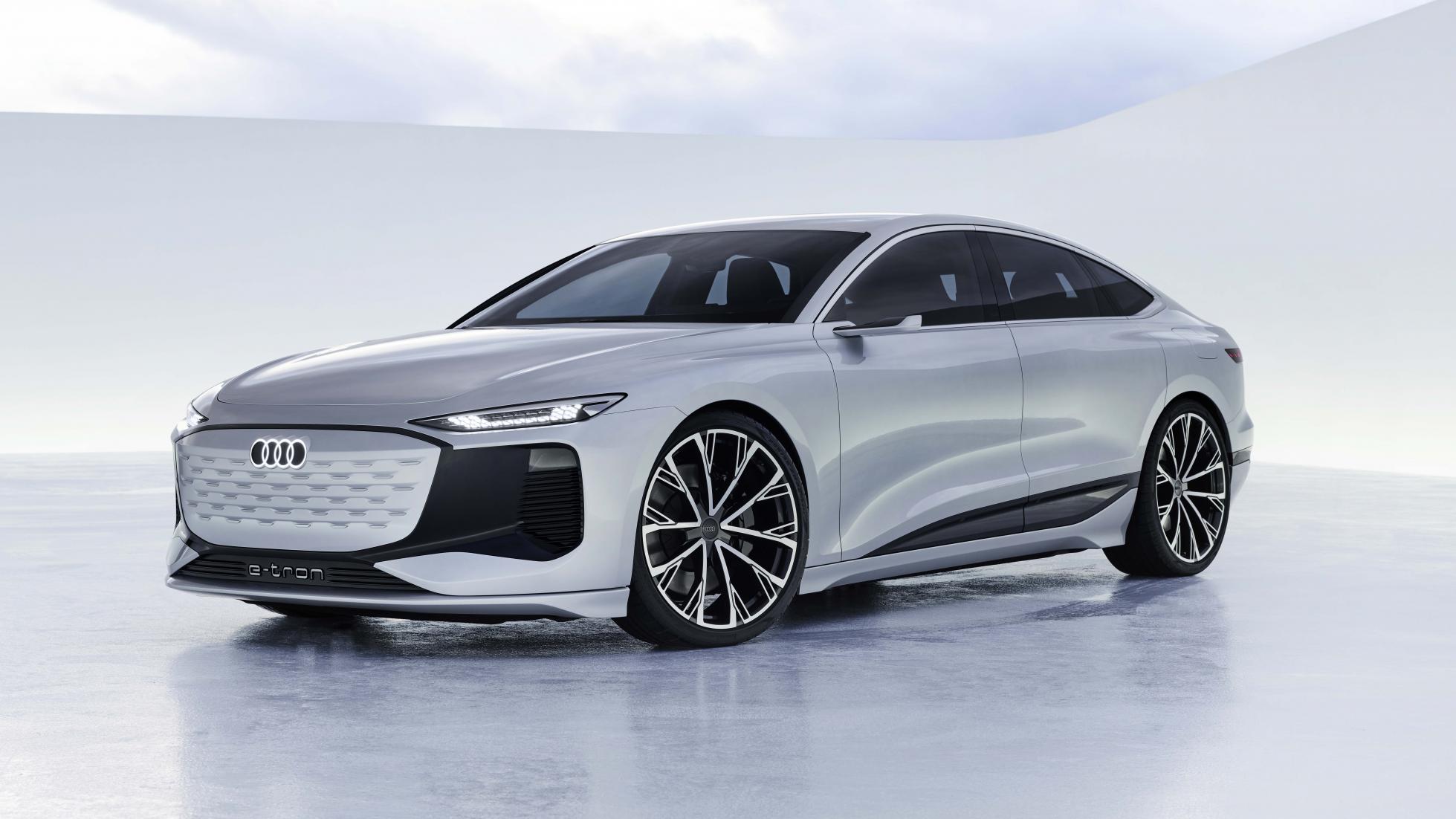 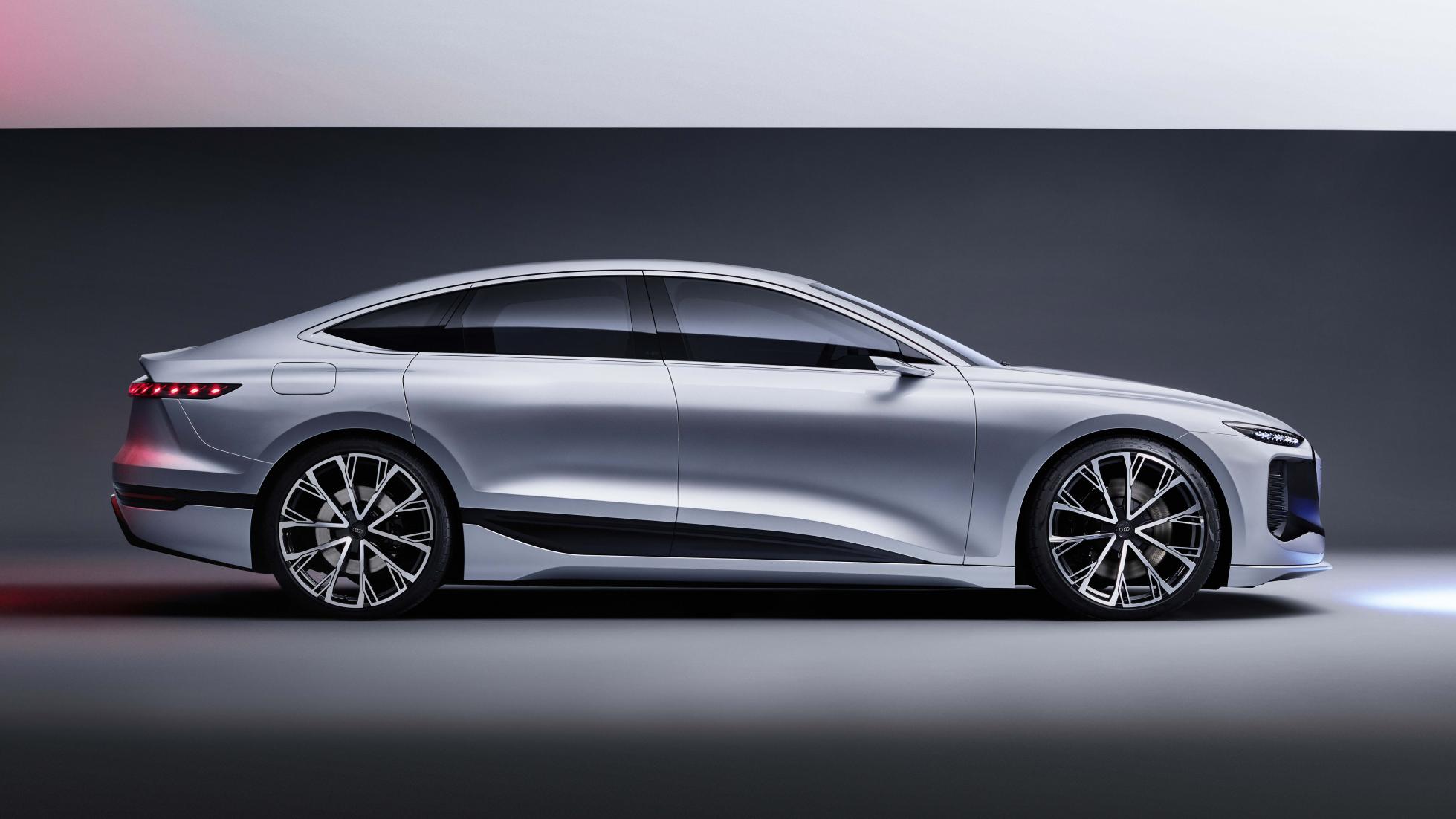 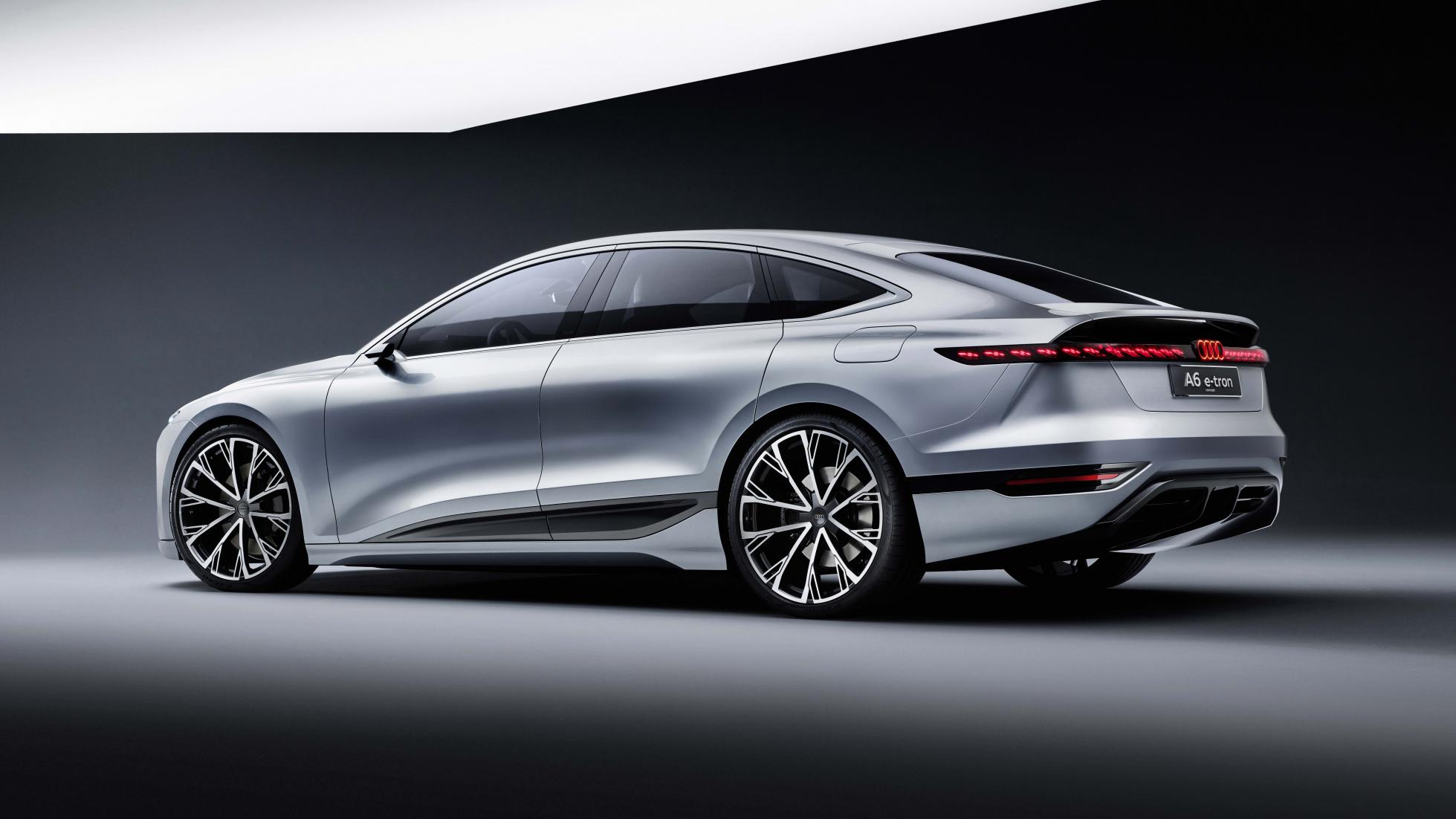 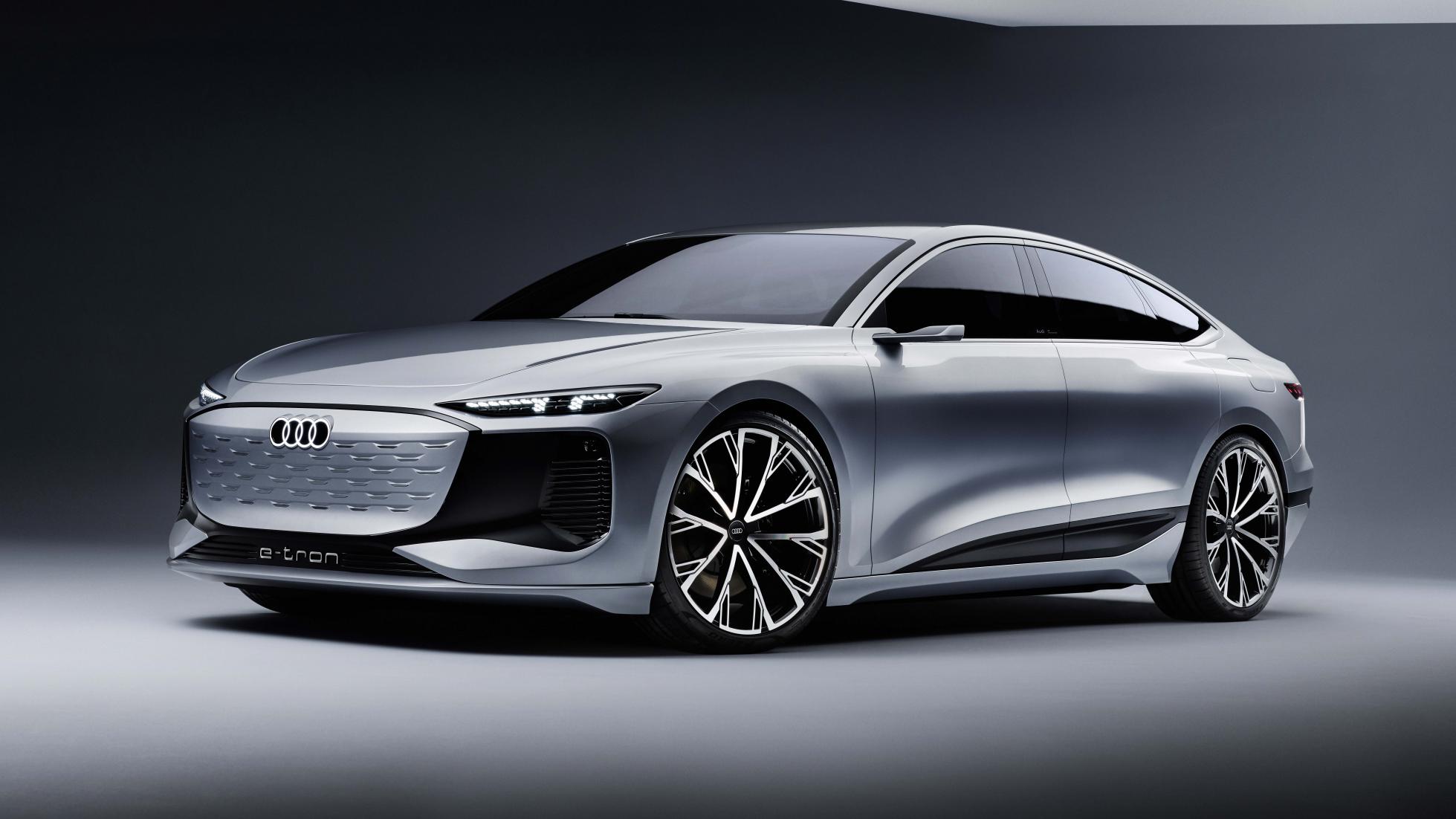 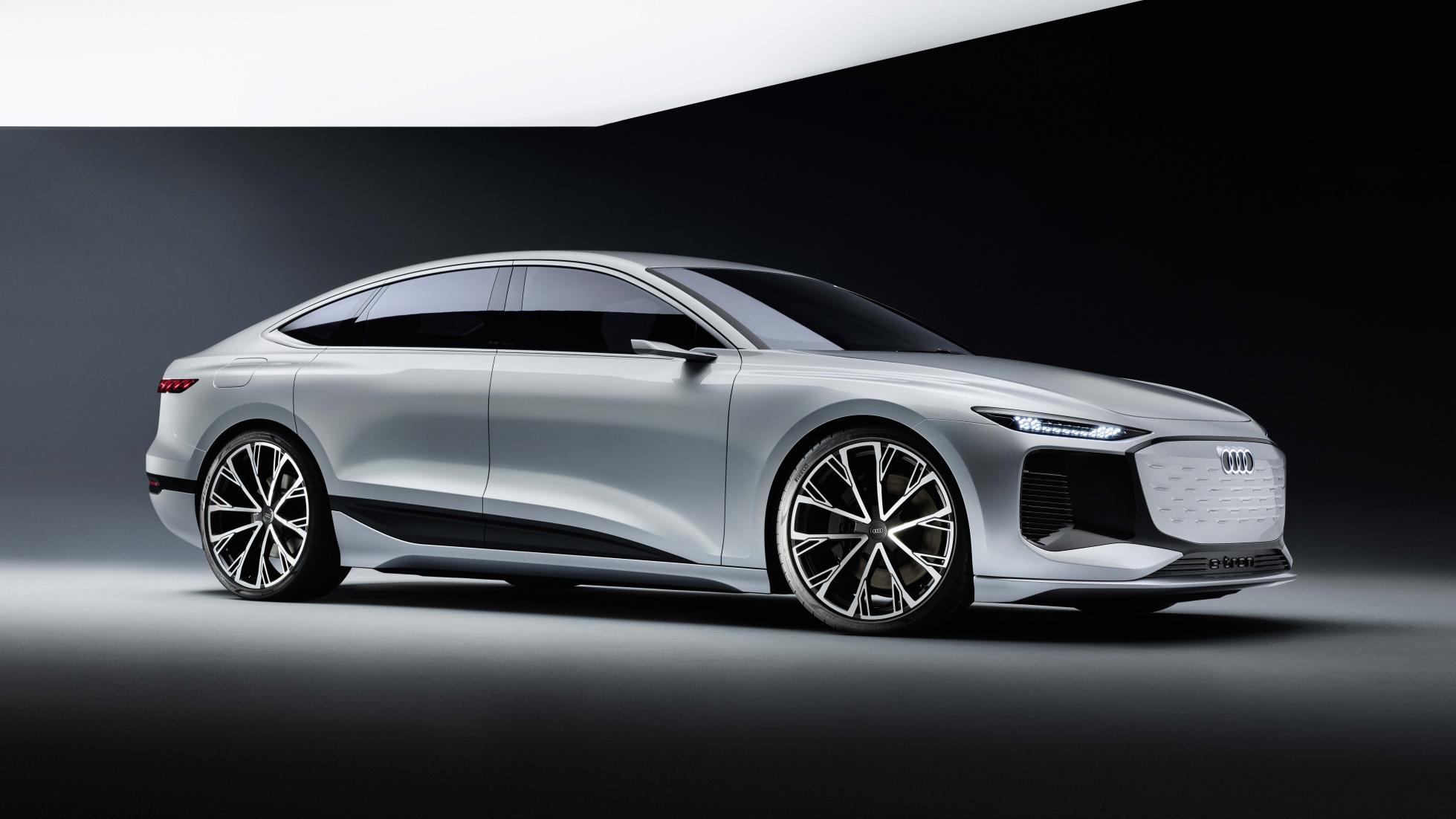 Pronounced arches. A swoopy, Sportback-style rear end. Fully customisable daytime running lights up front. Suffice to say, this new Audi A6 e-tron concept is quite striking, especially if - like us - you’re thinking of the multitude of rude words you could potentially spell out using those LEDS…

Anyway, want to know the best bits about Audi’s latest all-electric concept? It’s actually heading into production, it currently has a 2023 launch date, and this concept is apparently 95 per cent accurate to the final design.

Presumably it’ll sprout some door handles at some point, and the concept’s indicators that project a turn signal down onto the road below might not make production, but they’re a neat touch.

There’s more to this initial concept than just design, because the A6 e-tron represents our first proper look at Audi and Porsche’s new PPE platform. Slightly awkward name these days, but here it stands for Premium Platform Electric.

Audi’s first production car to be based on the new platform will actually be a Q6 e-tron SUV (sigh), and we know that Porsche is working on a Macan EV too, but having just unveiled the Q4 e-tron and its Sportback sibling, it’s easy to see why Audi’s leading with a sedan this time. We approve. 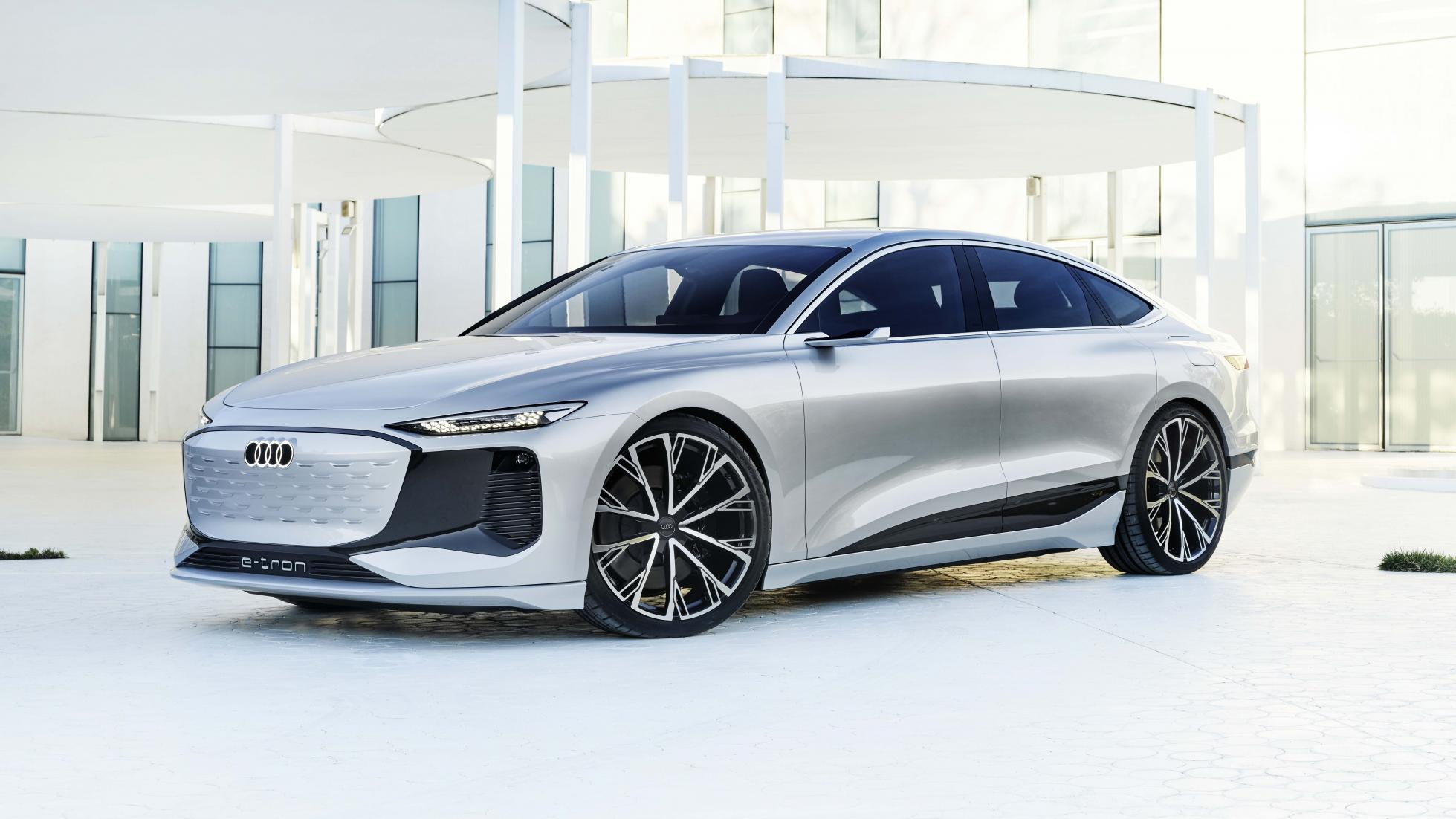 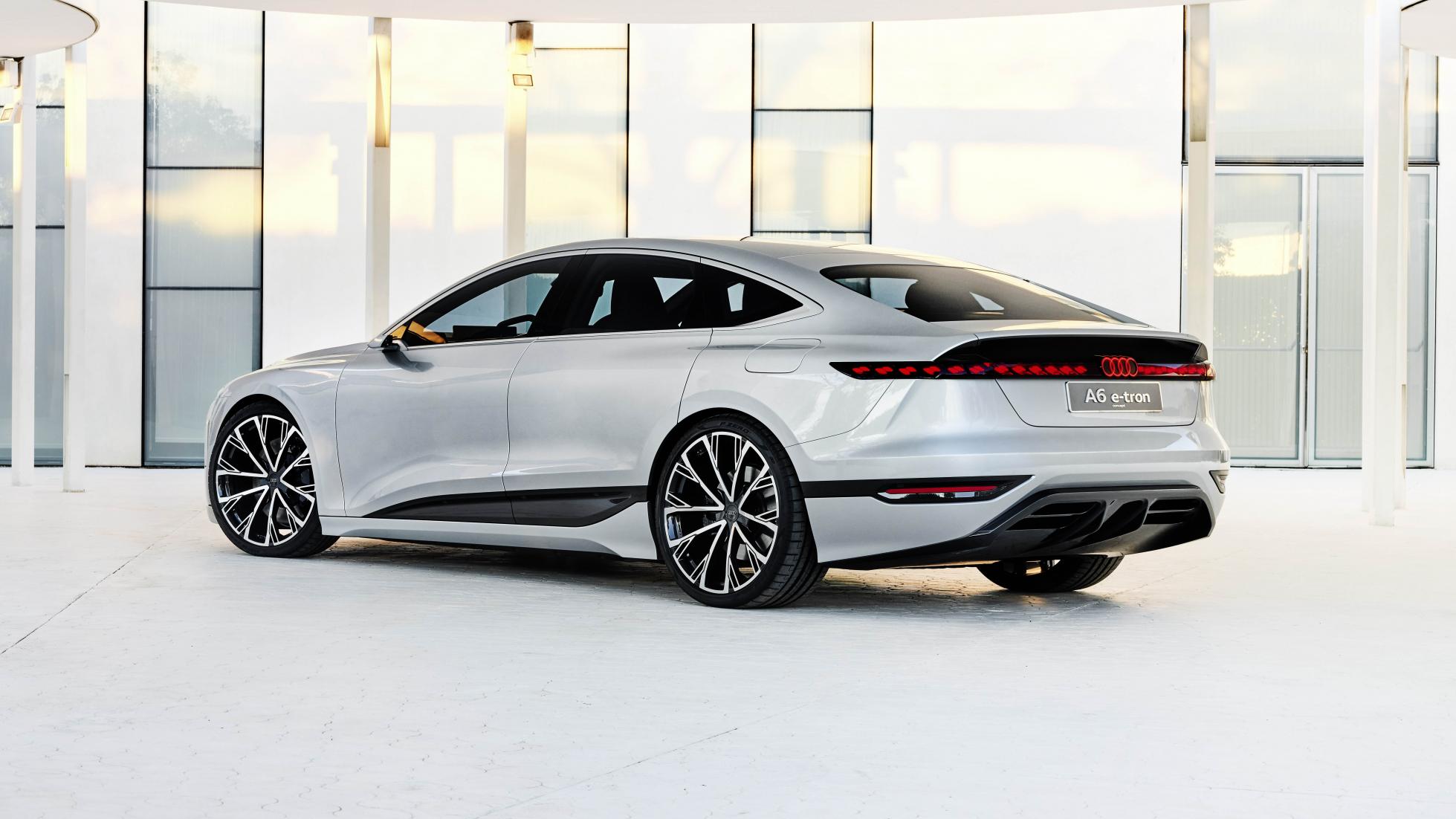 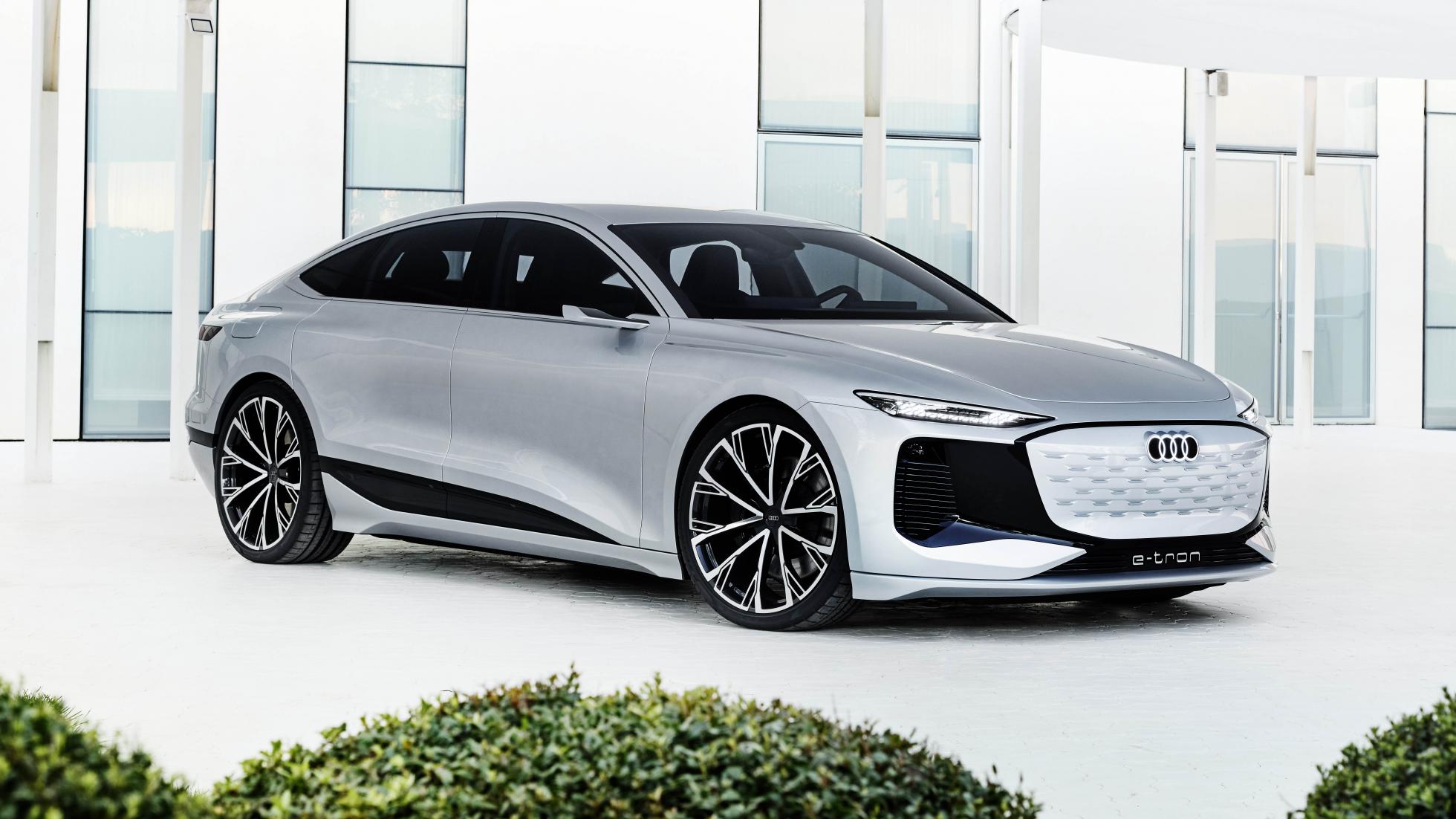 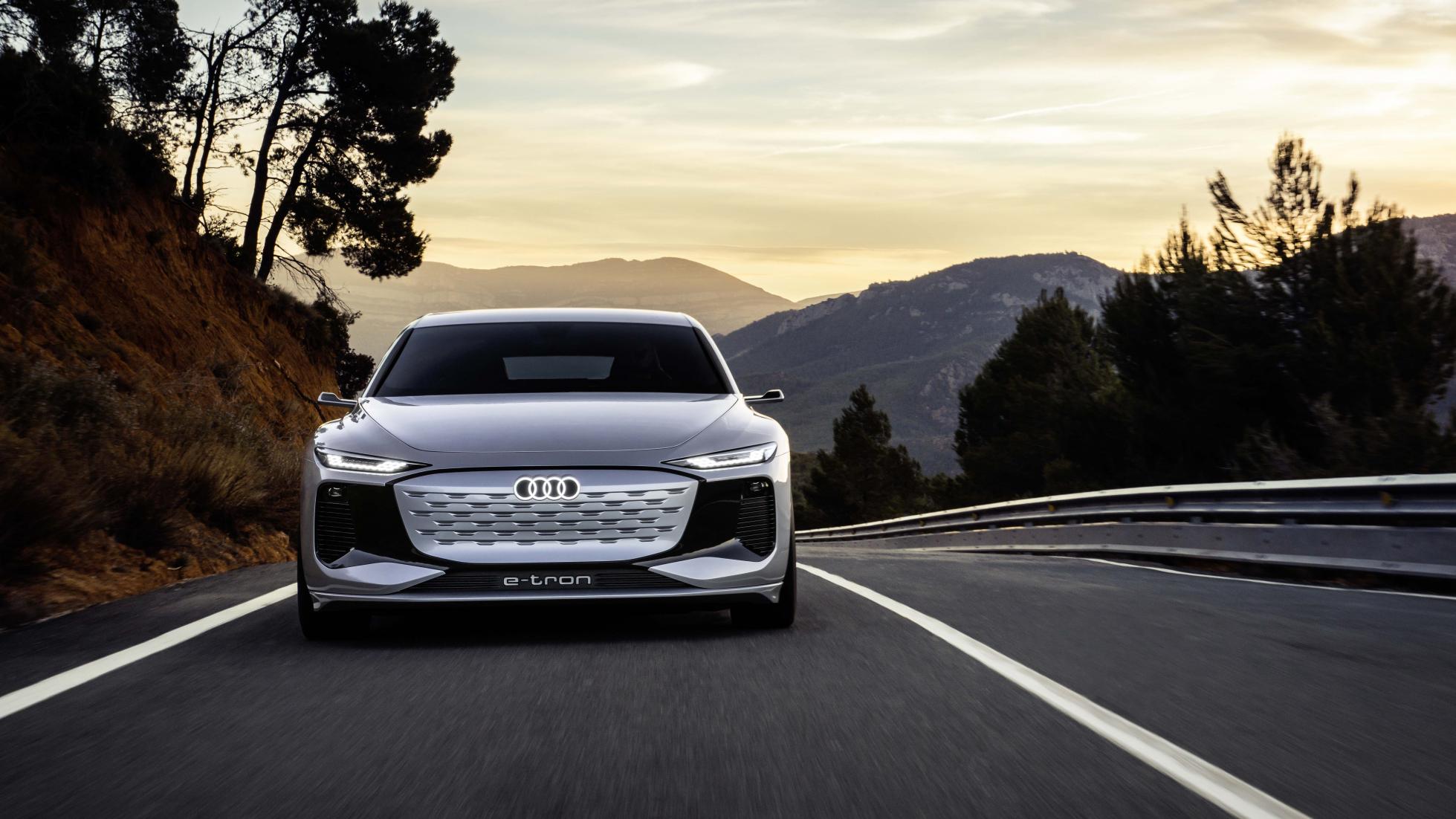 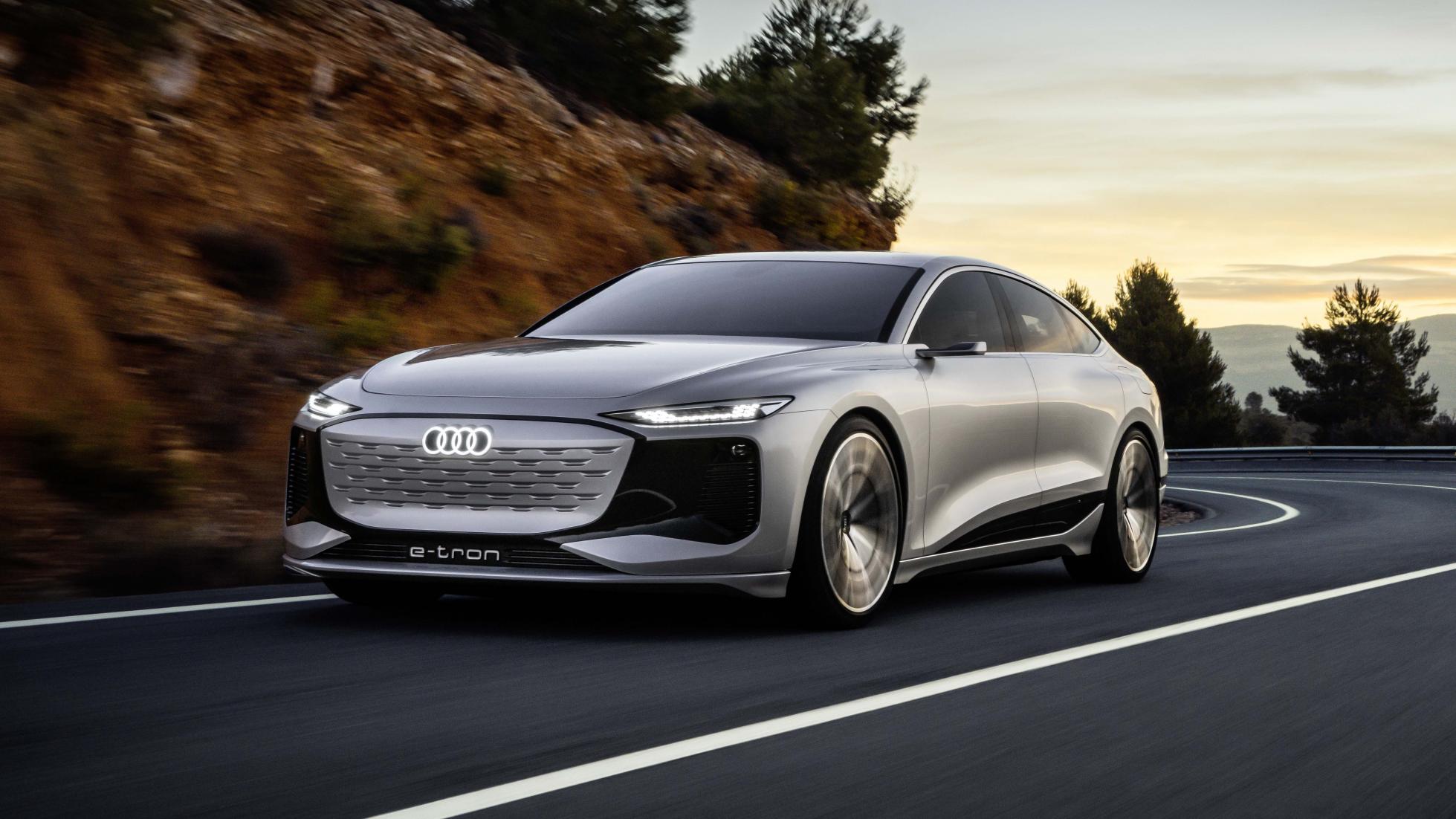 Back to the platform, then. PPE will sit above the Volkswagen Group’s MEB platform that underpins the Q4s as well as the Skoda Enyaq and both the VW ID.3 and ID.4. It’ll then be below the more luxurious and sportier J1 platform that houses the Porsche Taycan and the e-tron GT. Got it?

Audi says the flat-floored PPE will eventually underpin a whole family of new EVs, and that the most powerful A6 e-trons will get an impressive 462hp and 800Nm of torque, as well as a 100kWh battery.

Those will also manage over 700km of range and will be able to accept 270kW charging where the infrastructure allows. For reference, that means a 10-minute charge will get you around 300km of range.

There’ll be rear-wheel drive and quattro versions of the electric A6 when it arrives in a couple of years time too, and possibly even an Avant on the same platform. Oh, and Audi was very keen for us to write about the potential for an RS6 e-tron when we asked the question – perhaps they’re trying to gauge interest?

Well, Audi, we’re interested. Although just to confirm: the launch of the A6 e-tron doesn’t mean it’s the end for the combustion-engined A6. Audi hopes both will live on in perfect harmony for now… Pubs in the UK are open again! Time to impress your distanced drinking buddies with EV facts 632hp, 0-100km/h in four seconds and able to physically alter its wheelbase