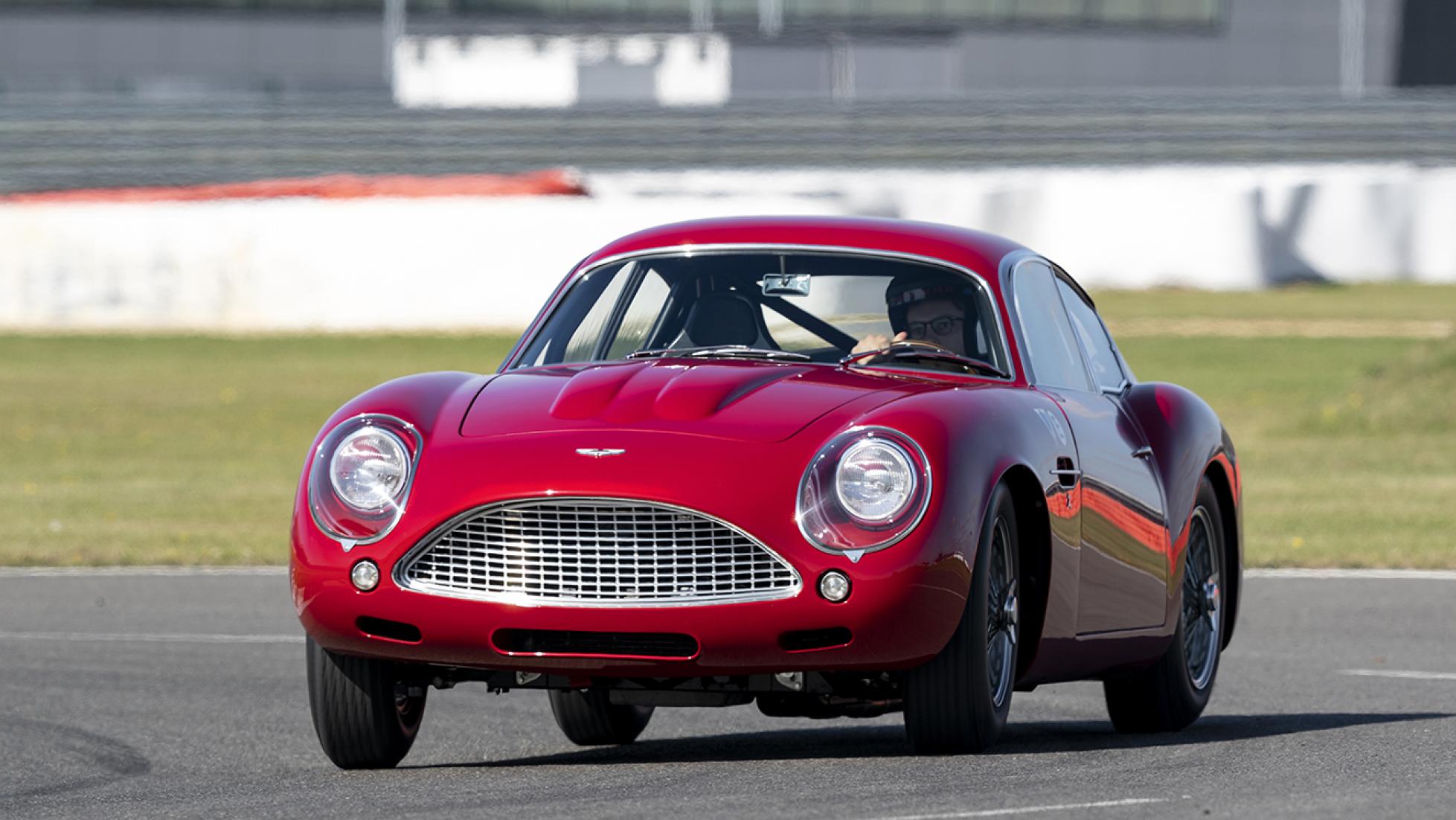 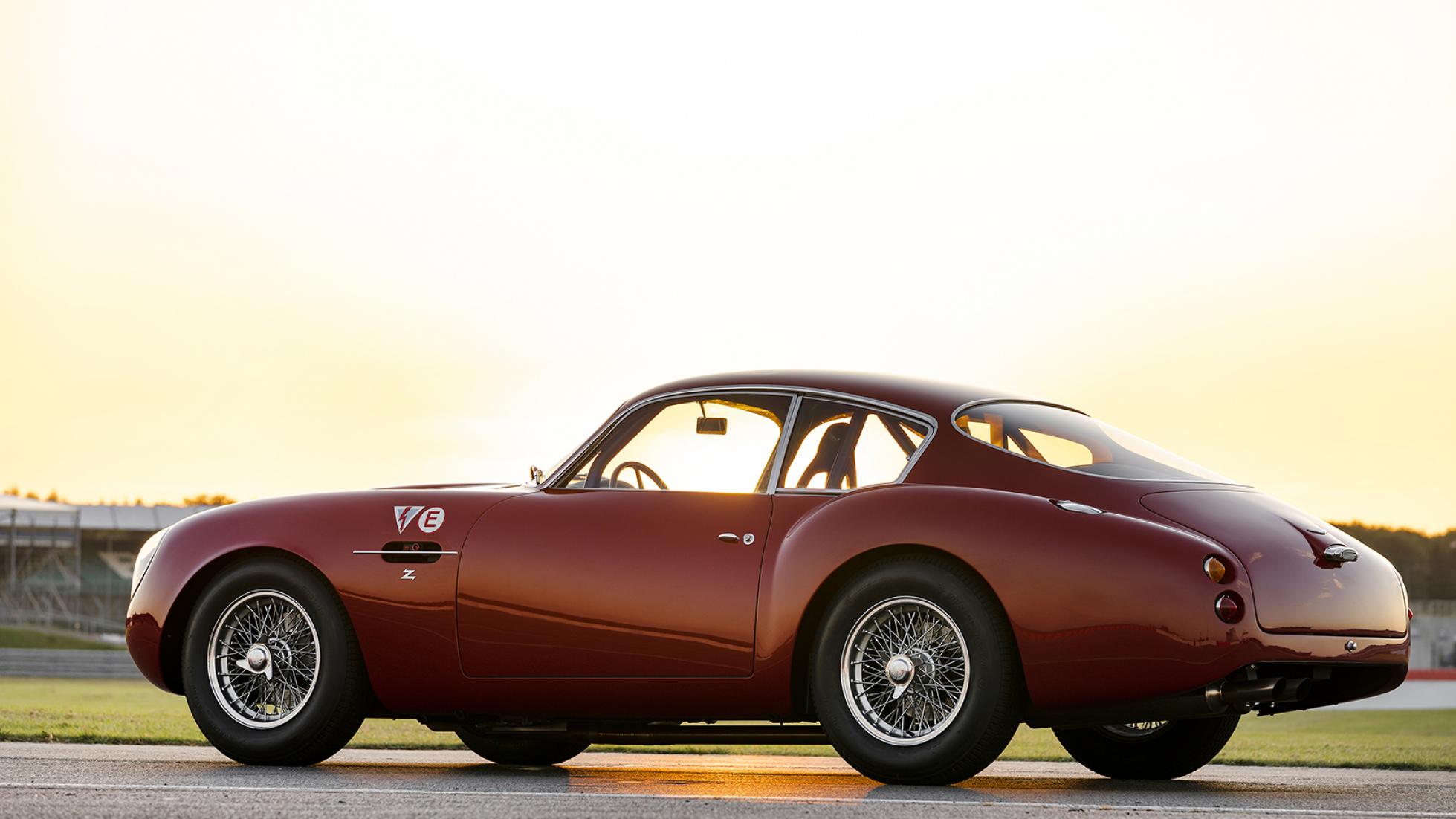 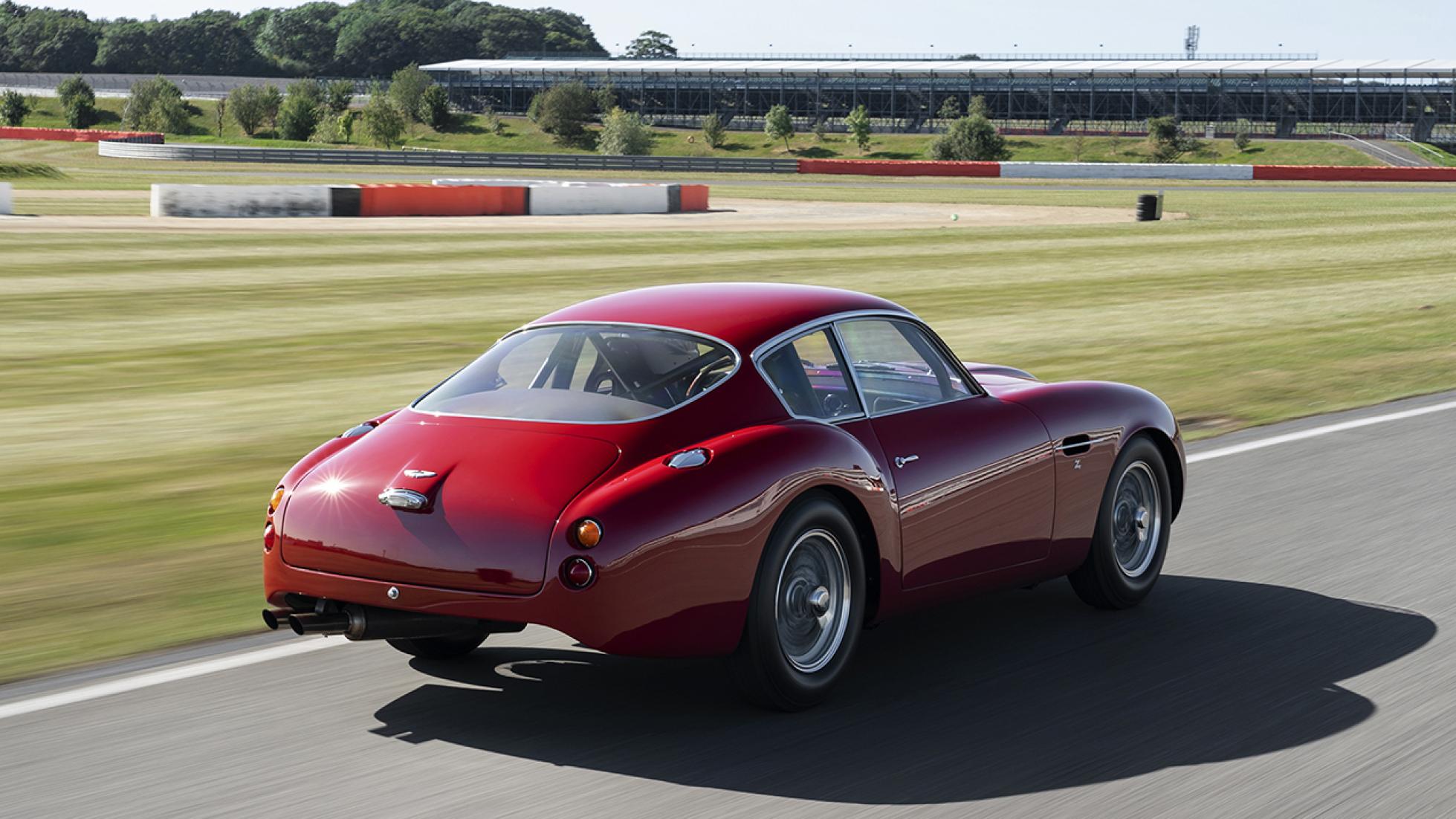 The most expensive new car in the world?

It is, or it was. This is the Aston Martin DB4 GT Zagato, the second continuation model from Aston Martin Works, the heritage-obsessed skunkworks of Aston. They’re all about crafting the good ol’ days out of hand-formed metal and rich nostalgia.

First there was the DB4 GT, then there’s this, and next year, AMW is dreaming up a series of new Goldfinger 007-spec DB5s. This isn’t cheap to do.

And I bet you’re about to tell me they’re all sold.

Not quite. The DB4 GTs all sold, despite costing £1.1m a pop. So, it made sense to build what is, in engineering terms, a very closely related sibling under the skin, but rebody it with the blessing of Zagato in this lightweight, more buxom bodywork.

There’s a catch. The catch is that, in order to buy one of the 19 examples, it’s part of a multipack. Not to be sold separately. You also have to have the new 2019 Aston Martin DBS Zagato, complete with its spinning grille vanes. I know, what a hardship.

Anyway, for the pair of Zags, you’ll need £6m. Plus tax. Paul Spires, boss of Aston Martin Works and the brain behind the recreation goldmine, won’t give an exact figure, but admits it’s the DB4, not the modern DBS, that makes up the lion’s share of that. Let’s call it, say, £4m.

Eighteen are sold. Aston has a few interested parties for the final one, and the day after I got to manhandle this red pre-production example around Aston Martin’s Silverstone test circuit, an American customer was jetting in for a play. Aston’s team were confident he’d be unable to resist.

Still, on the day I drove it, this DB4 GT Zagato was, however briefly, the most expensive brand-new car for sale in the world. In an attempt to block out the terrifying numbers on the insurance paperwork, I filled my head with nerdy facts instead. 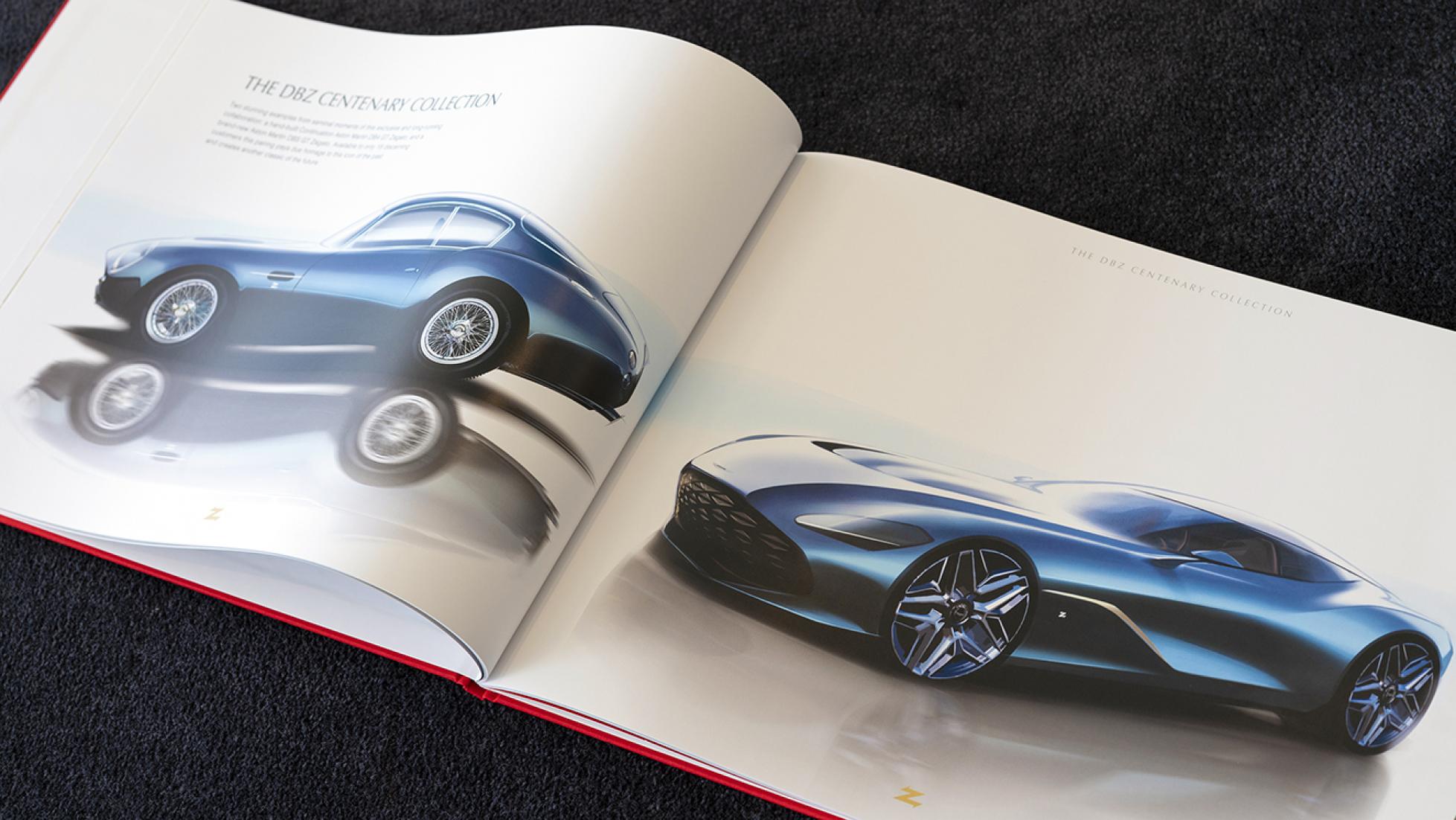 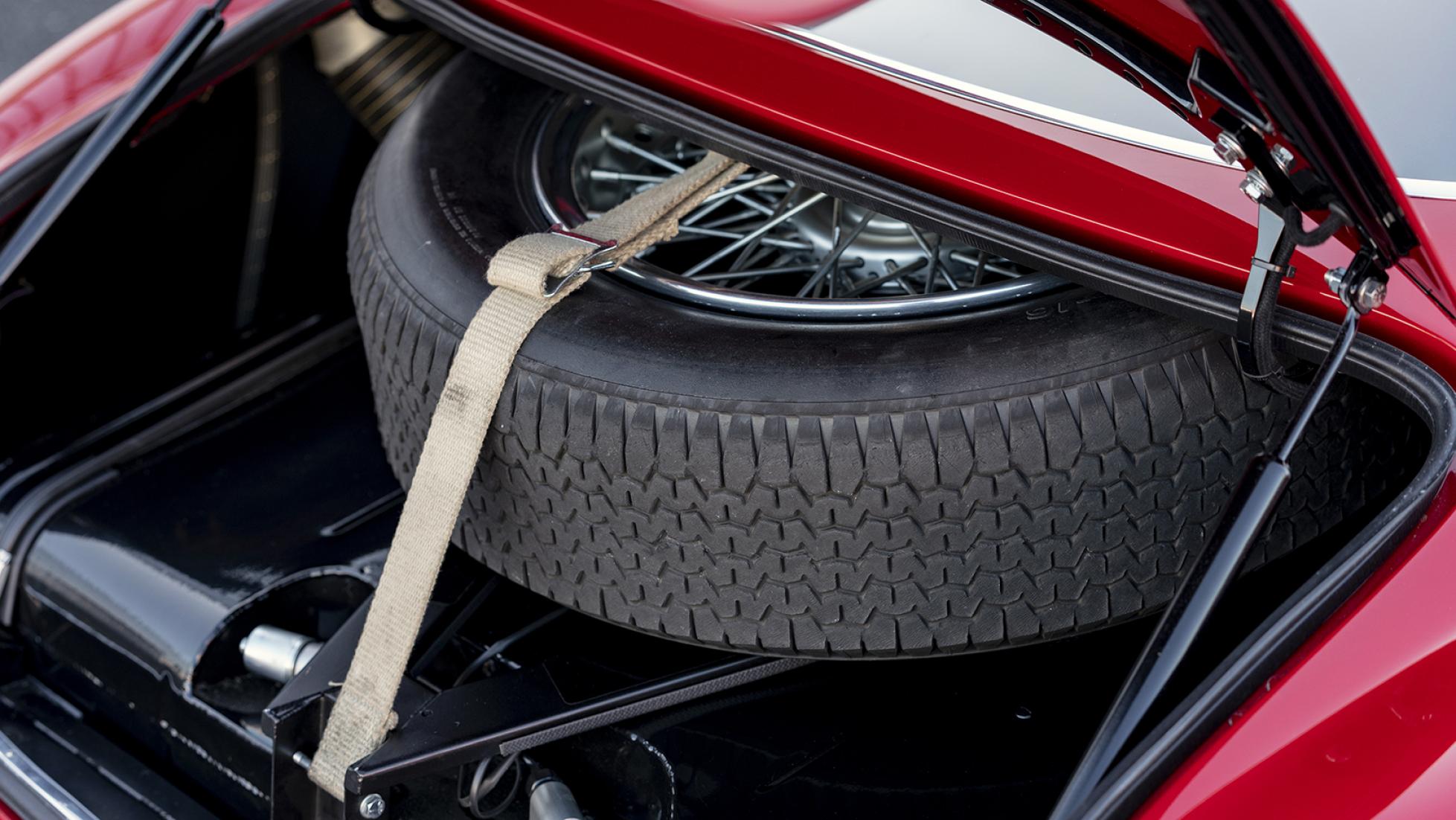 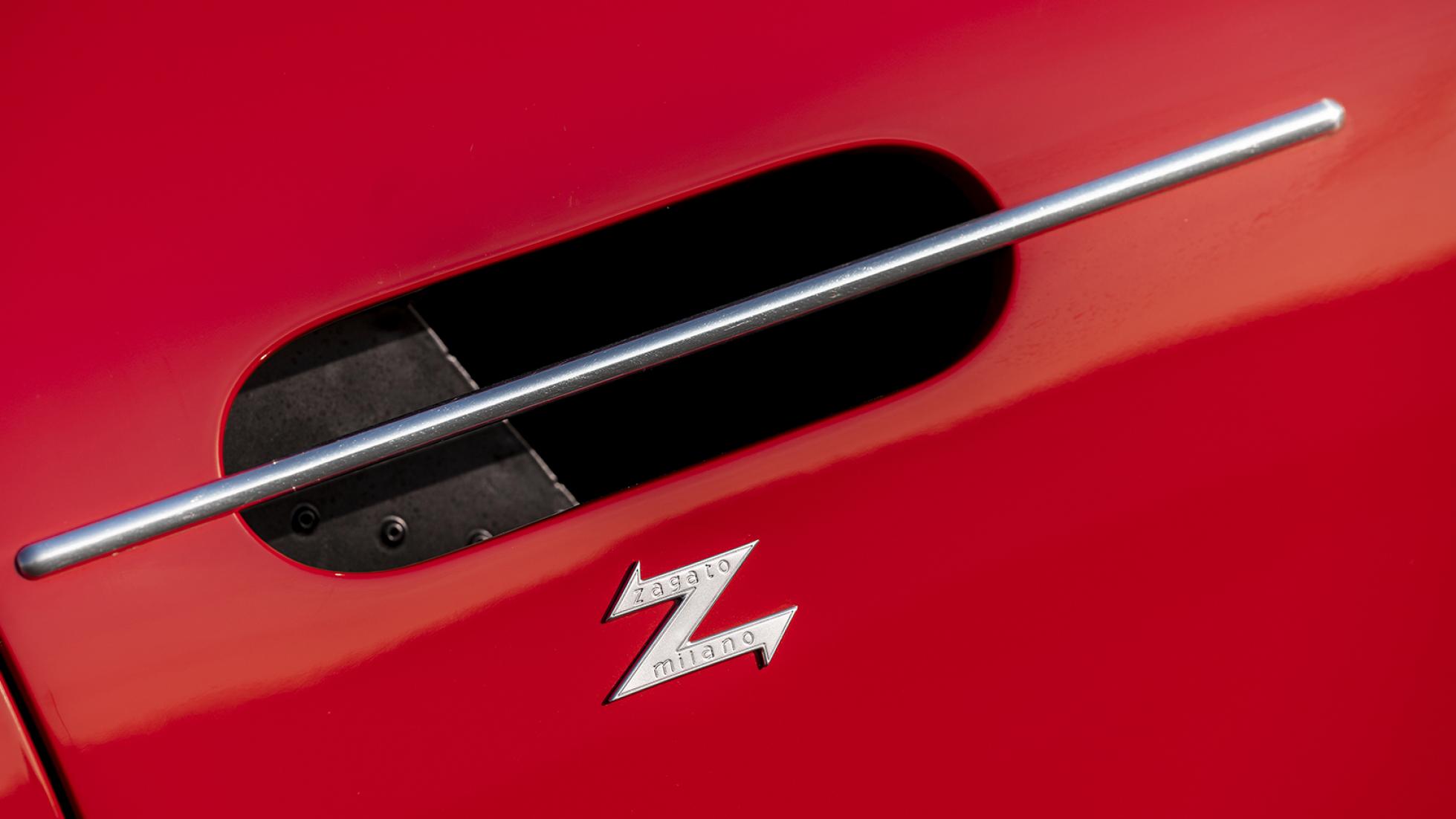 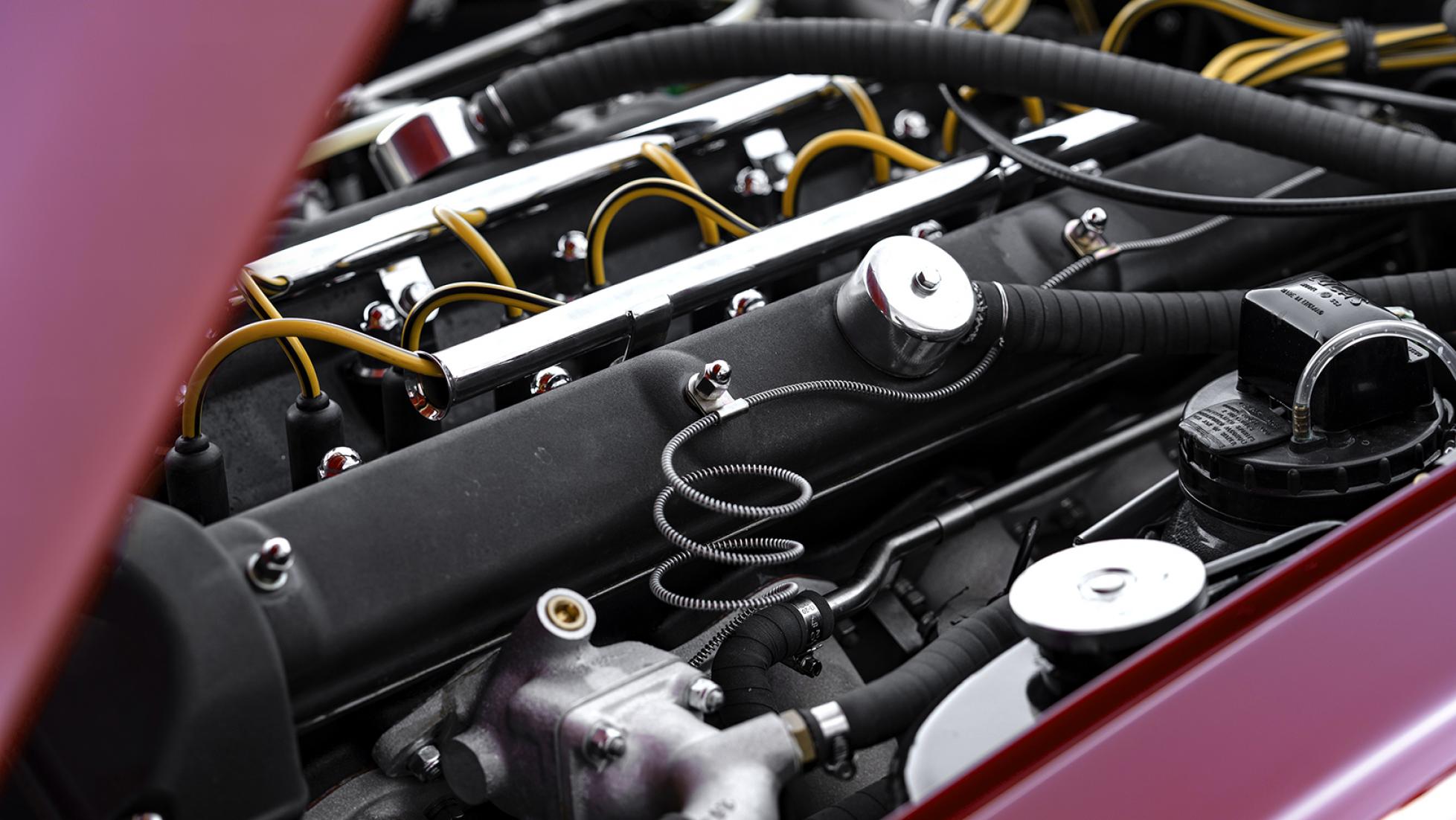 Would you be so kind as to impart them?

How long have you got? Aston Works was aware that for owners shelling out this much, simply plonking on a knuckle-chewingly pretty body wasn’t going to cut the mustard. So, the engine’s been upgraded. Original DB4 Zags made do with a 3.7-litre straight-six.

The new one has a 4.7-litre monster. To save the team slicing up an original block to suss out how to cast a new one, they instead scanned a 1960-spec motor in a giant X-ray device.

They were able to enhance the new version’s natural balance, cooling and even the stiffness of the block with modern aluminium chemistry, so the car idles and revs more cleanly, without fundamentally changing the engine’s character and response.

There’s extensive use of magnesium for lightness. It’s lifed for 6,000km of race-spec running. Oh, and instead of a period 300bhp, it’s now good for around 400bhp. So it goes like stink.

Wealthy collectors who shell out for bits of kit likes this aren’t just after raw stats, though. They’ve got bunkers full of unobtanium. What the Zagato adds to their hareem is deep authenticity.

It’s built a stone’s throw from Aston’s original headquarters, in a mock-tudor semi-detached house in Gaydon. They’ve been constructing vehicles on this site since 1857, when Modena was still all fields.

Not that Aston’s hoity-toity about this car’s Italian heritage. The Zagato-spec skin of the new one, hammered and rolled into shape before being checked under interrogation lights for minute imperfections, is 1.2mm thick.

When Aston took this very car to the 2019 Goodwood Festival of Speed, it returned with 19 small dents in its precious form, from careless folks leaning on it a tad too hard. Remember, look but don’t touch.

And did you know that the original 19 often left the factory painted, bizarrely, in Lancia colours? The story goes that Zagato also had its hands full building bodies for Lancia at the time, and well, to save time they slopped some favoured Italian hues on the British cars. 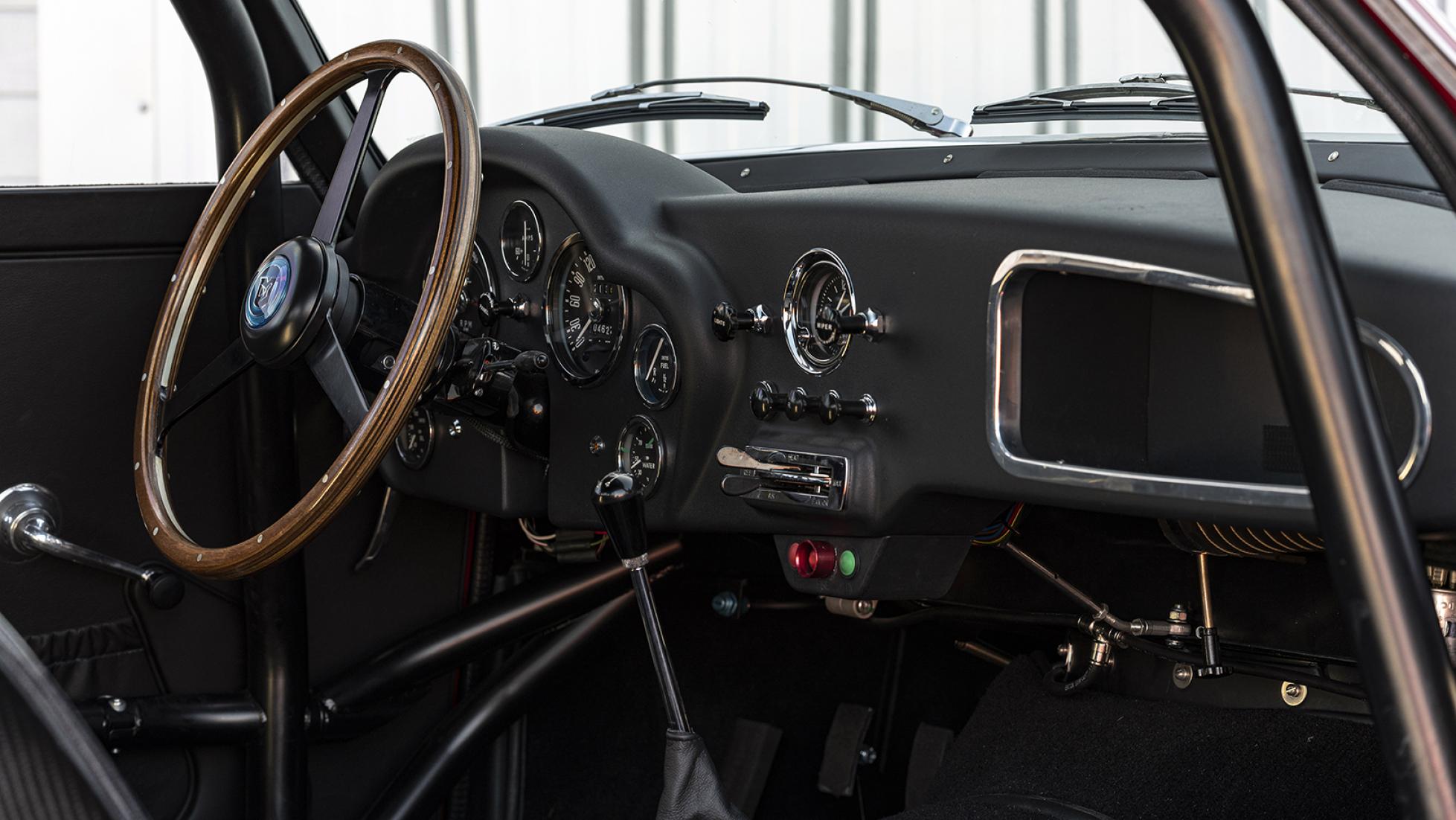 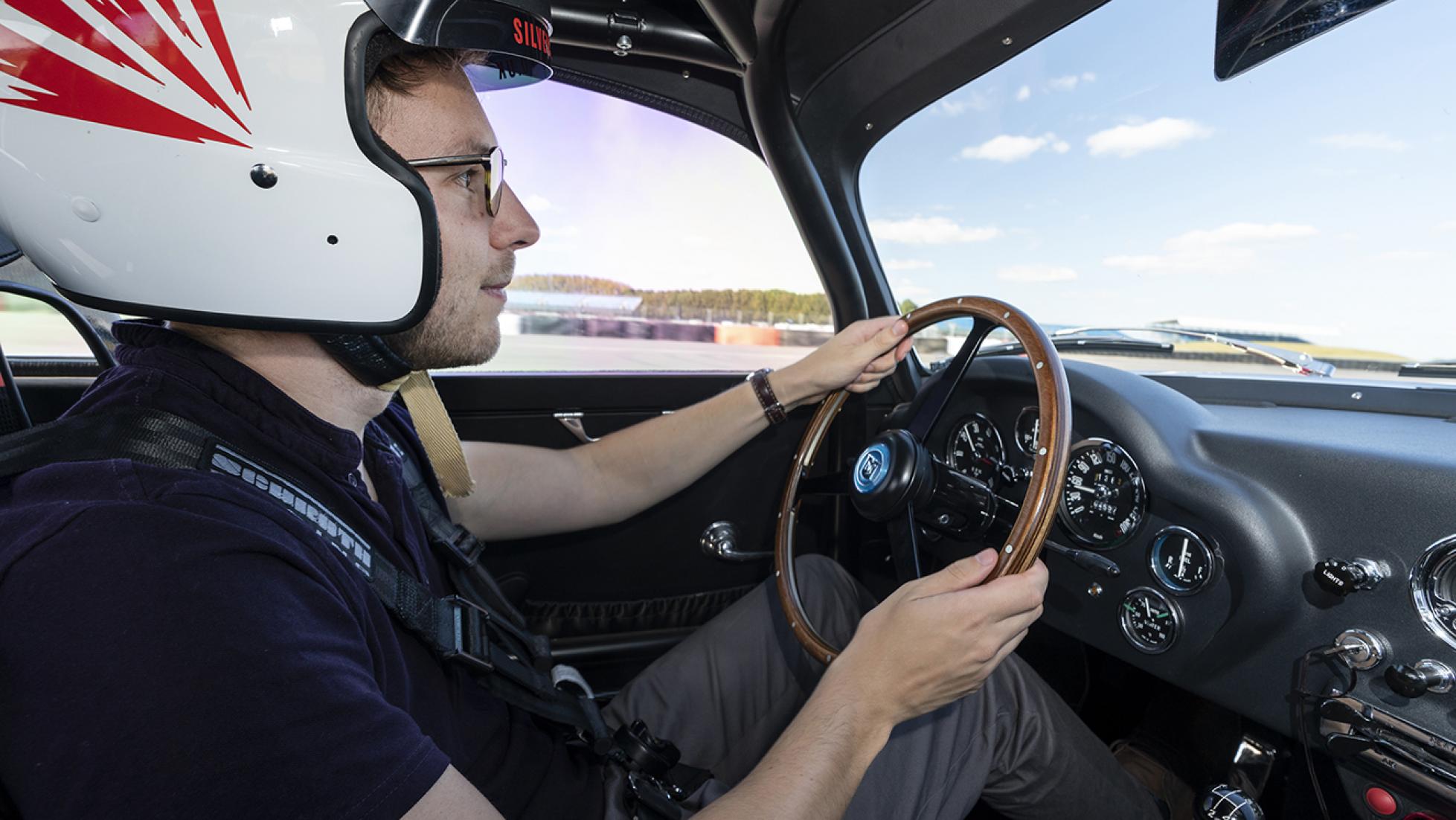 And I can have any spec I like, I presume?

Pretty much. There were some great specs being finished up during Top Gear’s tour: a duck egg blue, a  few classic greens and even a BRM livery with the orange nosecone.

Fairly obviously, you can’t have alloy wheels or a sunroof, and there are some welcome concessions to modernity: improved brake pads, a roll-cage, lightweight carbon seats with six-point harnesses and a 90-litre race-spec fuel cell in the boot, under the spare tyre.

I’d have my butler change that for me. Right, to the open road!

Hold your horses. Because this isn’t type approved, the DB4 GT Zagato isn’t road legal. Not in the UK. Maybe if you own the police or your private island, it could be. But in Blighty, this is a throwback track day special for millionaires who don’t want the unreliability – or the guilt – of spanking a period example.

Understood. To the private test track!

The cost, the scarcity, the niggling detail that this red example is promised to the Zagato family museum… I don’t mind telling you I was mildly bricking it as I set off for my first laps.

But AMW boss Paul had been reassuring me this is – despite being beautiful, looking like it’s from Tudor times and having an impossibly spindly steering wheel and delicate gear lever – a racing car. It’s built to be abused.

So, I’m advised not to pussy-foot around it. Stab the throttle ahead of each downchange, fire the gears in – it’s a 4spd manual crash-box with a proper motorsport whine to it – and give the brakes a proper stamp. “You’ll enjoy it!”

The hollow door ker-klunks shut. Twist the teeny key, give it a dab of throttle to  encourage that enormous straight six to wake up, then let the surprisingly lightweight clutch up and marvel, as the Zag glides away, how few histrionics there are.

It doesn’t baulk or kangaroo or bog down. It’s the lightness – 1,200kg and 400bhp, with sprinty gearing. It wants to be on its way. 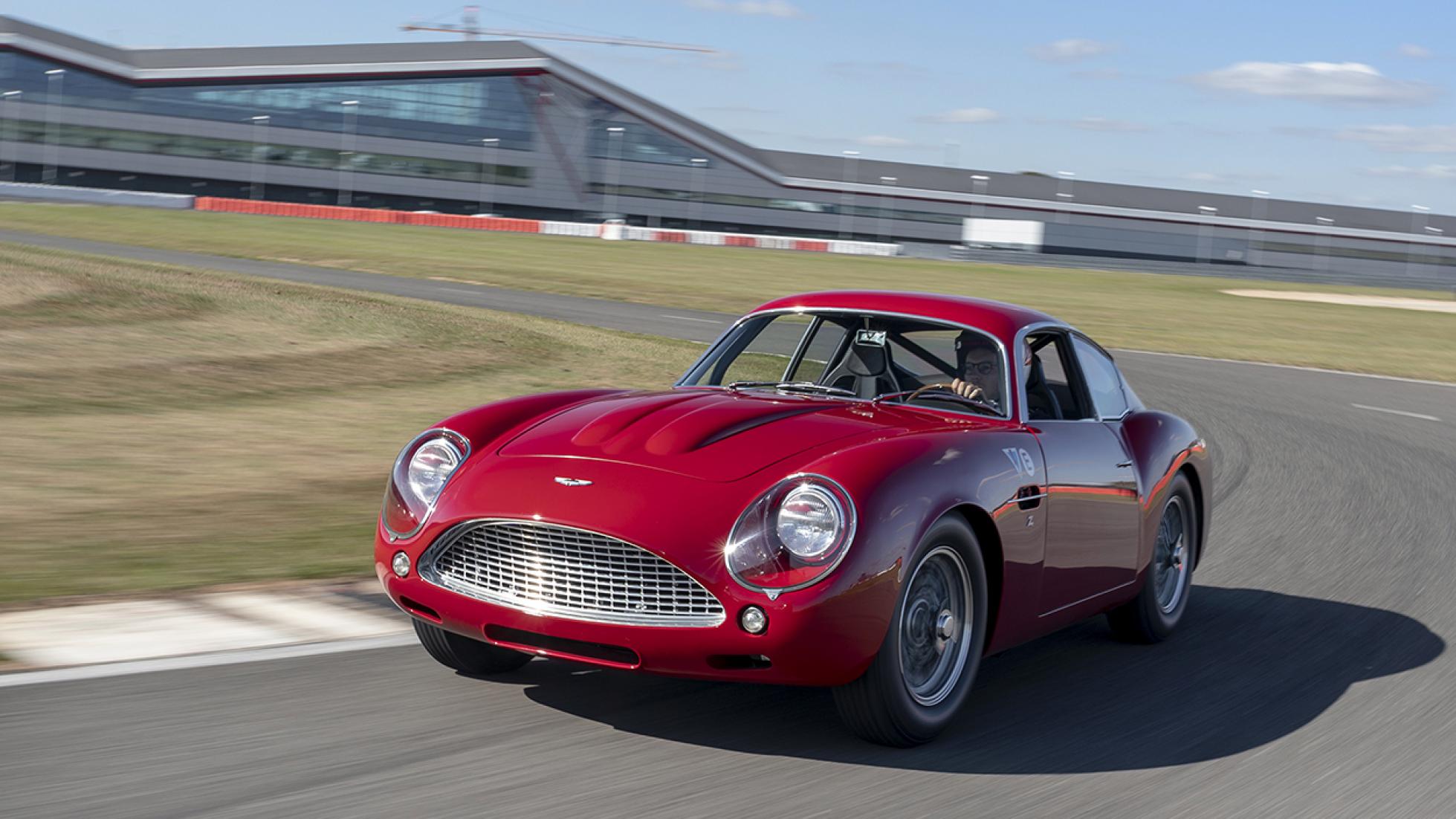 Hold on. If this is the part you start waffling on about low grip limits and the perfect symbiosis of old-school machine and modern man, I’m off.

I’ll spare you – you’ve only got to look at the mountain-bike-spec tyres on this thing to know it’s got the grip of a Labrador on a polished floor. Even with the hefty engine squashing the front tyres into the road, there’s a fair old heap of understeer as the Zagato tips into a corner.

Apply the throttle too early and the soft lollopy suspension comes into play, rearing the nose up like a startled police horse at a football match. It feels like it might pull an actual wheelie.

But the principles aren’t that tricky, really – just as you’ve learned from watching all those classics dicing around Goodwood at the Revival.

Show the car some steering to vaguely aim the bulbous nose where you want to go, then tiptoe across to the gas pedal and use that as a sort of rudder to get the backside to pivot around.

It’s a lesson, this thing. It’s a detox. You don’t need torque vectoring, adaptive suspension, plasticine tyres and eleventy-stage traction control for track work. What you need is pure balance.

Is it actually quick?

Not savagely, but the engine builds with a linearity alien to modern exotica, and the gearbox is the star of the show, soaking up heavy-handed changes and rewarding those handful of times I get the throttle blip spot-on with a gloriously delicate cog-swap on the way into the braking zone. 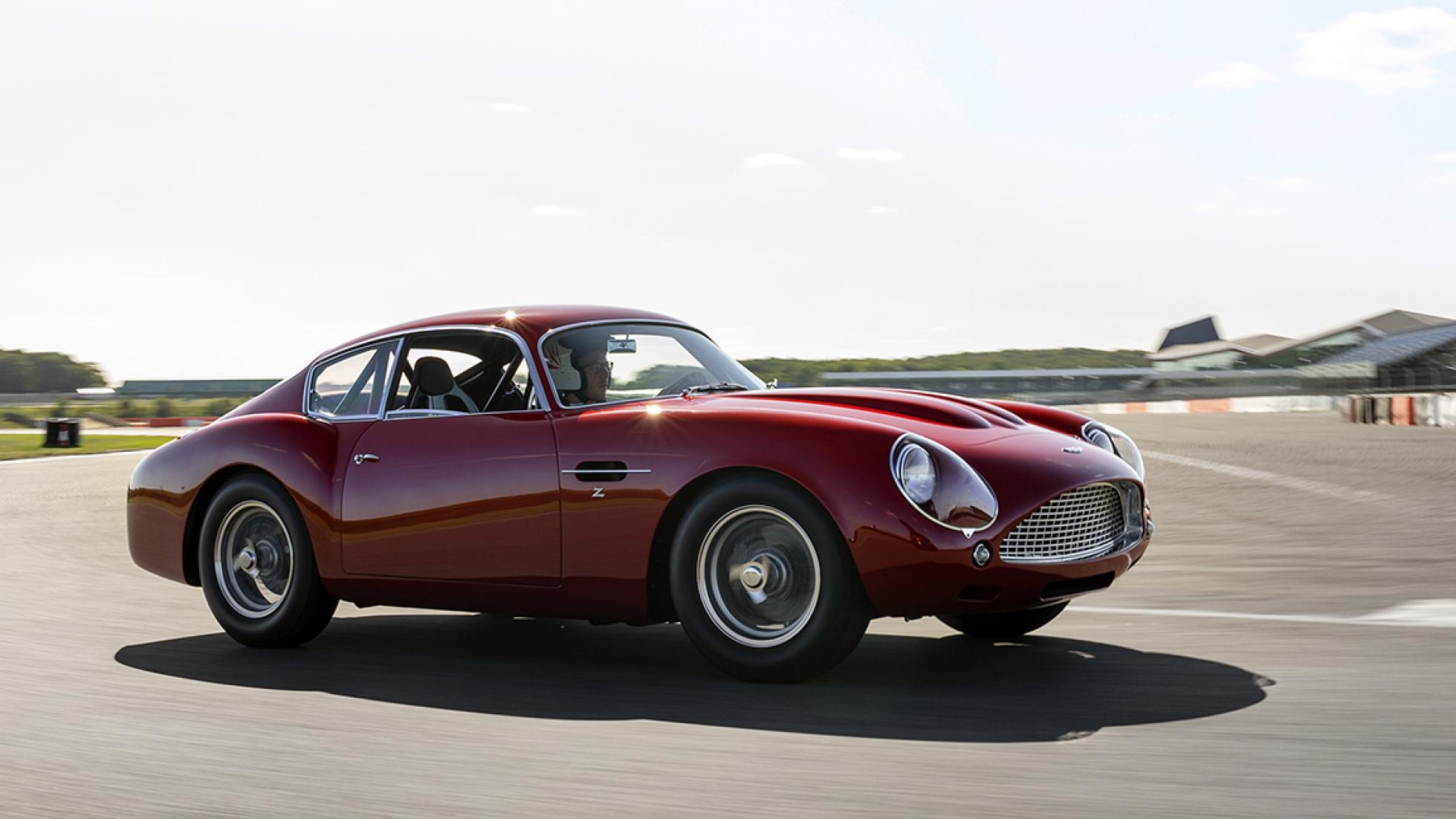 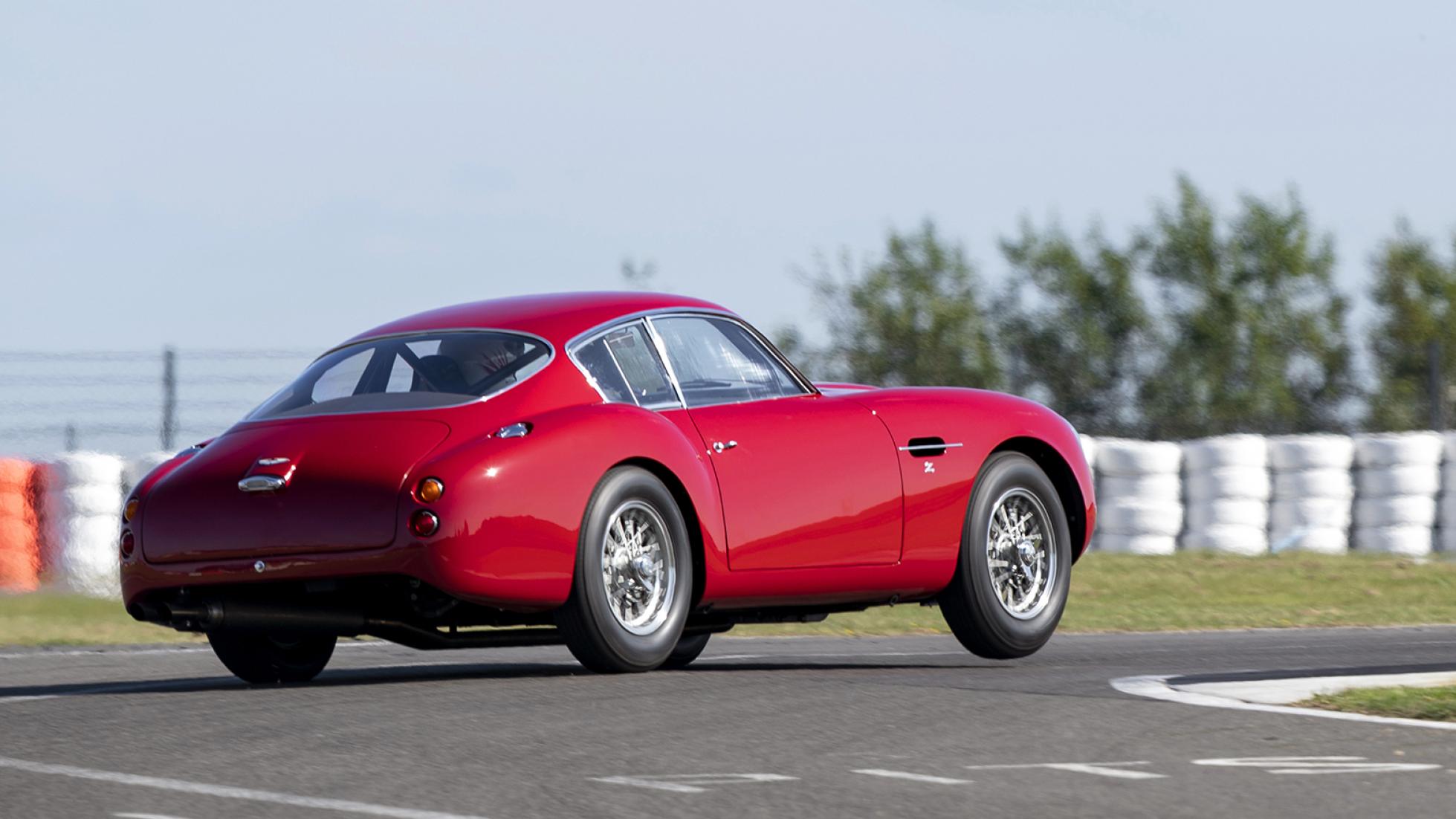 Great, but can’t I have all this fun in any classic car?

The same principles apply, but what’s great about a modern recreation is that you get all the highlights of the experience – the rich, deep-baritone noise, the fingertippy sensation, the smell et al, but you do without the sense that at any moment, a large and elderly suspension or powertrain component might fail.

I once drove a Jaguar D-type at Jag’s test track, and down the back straight at about 190km/h, the coolant hose let go of the engine. So it promptly turned into the world’s most beautiful kettle, and that was that.

Before I had a go in the Zagato, another journalist took it out for the time of their life. Another followed. And it’d had a full day of lapping the day before. And yet… it behaved.

Nothing overheated, nothing ran hot or worked loose. It’s such an absorbing, physical experience inside, chances are this is one of the only ‘classic’ sportscars whose fitness will outlast its driver’s.

Basically, it was an utter privilege to drive. The Zagato spent an hour wooing me back in love with cars, with driving, and outrunning the binary nonsense of the huge price or what lap time it’ll do.

Whether it’s just to look at, to watch it slide by with the driver fighting the wheel, or to actually pilot, grinning, drenched in sweat, the DB4 GT Zagato exists simply as a machine to enjoy. Worth every penny.